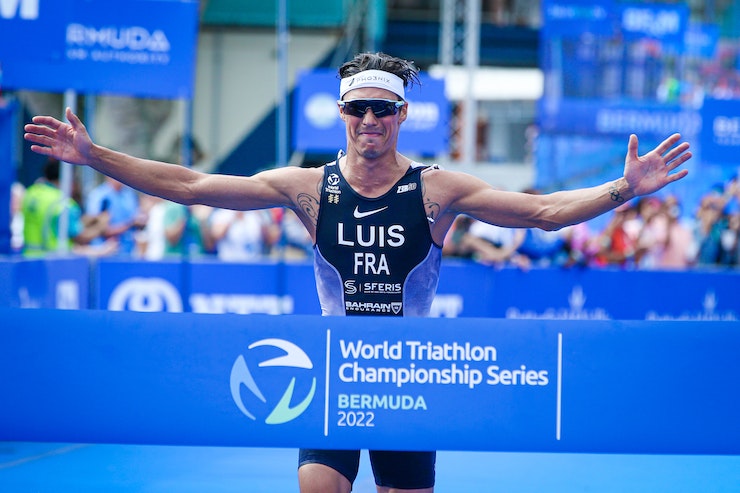 France’s Vincent Luis laid down a huge marker for the next 18 months with a resurgent performance to land gold at the World Triathlon Championship Series Bermuda on Sunday afternoon in Hamilton.

It was to be the 33-year-old’s first WTCS podium for exactly a year, his first gold since Hamburg over two years ago, and the emotion was clear as he took the tape after running solo for the majority of a brave 10km run.

“Last year I thought I was done and then I got injured again, but still I’m surrounded by amazing people who believe in me, so I just had to believe in myself as the minimum I could do,” said an exhausted Luis. “The last lap, I was just remembering all the days I couldn’t run.”

“When You have Alex Yee and Kristian Blummenfelt behind you, you never know what might happen, and I had zero expectation for my run, so I’m just really happy for myself. I knew I had to be careful with the pace and make sure I had another bullet left for the last lap.”

Behind him, the Spanish duo Antonio Serrat Seoane and Roberto Sanchez Mantecon showed their run prowess once again, both scooping remarkable debut WTCS podiums having come out of the water 28th and 34th respectively and then patiently awaiting their moment to strike. The pair had been in the chase bike pack for the duration of the 40km run and had considerable ground to make up out of T2, easing through the gears to pass the gutsy Jelle Geens and take silver and gold respectively.

In the context of the World title chase, Geens held on for fourth, Britain’s Alex Yee in fifth with a late surge, not quite enough to put him above Hayden Wilde in the Maurice Lacroix Rankings with just the Championship Finals Abu Dhabi to come at the end of November to decide the 2022 World Triathlon Champion.
—
The high winds that were forecast stayed away from Hamilton on Sunday morning, but strong gusts remained and the water was choppy as the 53 athletes lined up for the start of the two-lap, 1500m sea swim.

Jelle Geens took to the right of the pontoon predicting the other top-ranked athletes would stay left, and that the returning Norwegians Kristian Blummenfelt and Gustav Iden further down the start list would likely have to head that way as the positions were taken.

That was how it played out, and it was soon Vincent Luis slicing through the clear water up ahead with Mark Devay (HUN) and Vasco Vilaça (POR) for close company.

After 700m it was out onto the pontoon and then back in, Luis taking a good look behind to see how the rest of the field was faring, the likes of Jumpei Furuya, Vetle Bergsvik Thorn and Jonas Schomburg already 20 seconds back, Yee 27 seconds with Blummenfelt, Geens just behind them.

The 800m second lap saw the pace drop a little out ahead, ten seconds separating the top eight into transition, but it was Kyotaro Yoshikawa (JPN) with the slick T1 and out onto the bike first.

That lead eight now also included Devay, Csongor Lehmann, Schomburg, Vilaca, Furuya and Simon Westermann with Yoshikawa and Luis, and by the end of lap one they had 40 seconds over the large chase pack predictably spearheaded by Blummenfelt and Iden, Jamie Riddle off the back.

Up Flora Duffy Hill for the second time it was Geens and Yee on the front, but even the combined talents of that group couldn’t make any inroads on the leaders, who could even stretch that advantage north of 50 seconds as the laps ticked by.

Lehmann couldn’t keep the pace going and dropped back on lap three, but the chasers were finally able to close the margin a small albeit important amount as the bell signalled one last climb and lap ahead.

Into T2 and racking the bikes it was Schomburg and Furuya out ahead, Luis dropping back just a little, while Geens and Brandon Copeland (AUS) were first out giving chase on the first of the four laps.

It was Vilaça and Schomburg setting the early pace and they had 30m over Luis and Devay, but the two-time World Champion was finding his flow and looking steely as he closed the gap and took his own turn out ahead.

That ‘turn’ quickly became a fully-fledged move, and Luis was looking smooth by the halfway mark even though training partner Geens was seemingly closing in with every step. The gap was now 20 seconds as the Belgian moved into second, but unfortunately for Geens, Luis was once more showing every ounce of sheer grit and resilience that marked his title-winning 2019 and 2020 seasons.

The effort to close in took its toll on Geens, too, while the Spanish duo of Sanchez and Serrat were by now in full flow. They moved into second and third respectively over the closing stages, Yee and Blummenfelt now eyeing the Belgian.

Out ahead there was one final short, stinging climb for Luis to negotiate, but once through it, the gold was his for the taking, hitting the blue carpet with a ten-second advantage and taking the tape as the emotions poured out of him.

“I don’t really believe it yet, it’s been so many years trying to reach this moment,” said Serrat afterwards. “I wasn’t feeling so well on the bike and it was impossible hitting the front with the Norwegians pushing the pace, so I thought it was time to focus on my run. I knew it would be hard with the hill and the wind and just held my pace with Jelle then took my moment. I couldn’t catch Vincent but now I’ll enjoy this moment and continue with the work.”

“This is amazing, my first time in Bermuda, my first WTCS podium, it’s incredible,” said a thrilled Sanchez. “I felt so good on the bike and coming down to the run was feeling better little by little. It’s been incredible having all these people cheering here.” 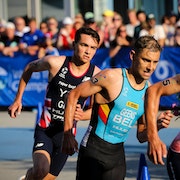