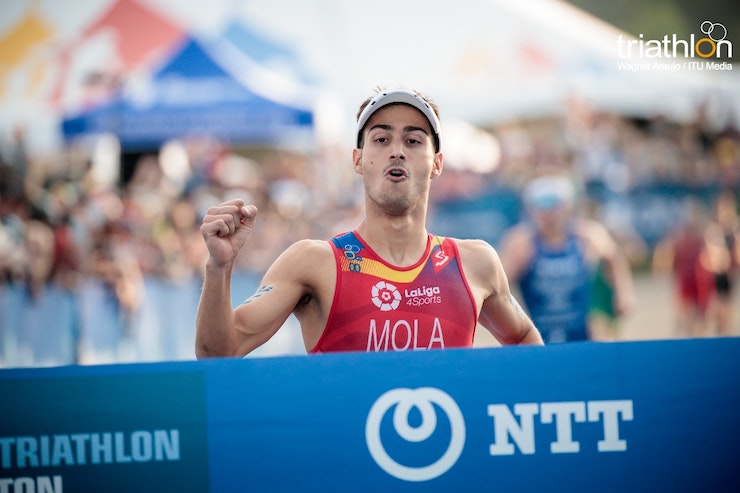 In an exciting early evening showdown in Edmonton Mario Mola (ESP) surged ahead of Kristian Blummenfelt (NOR) in the final lap of the run to capture his fourth consecutive WTS podium. Blummenfelt showcased his tremendous power twice surging ahead of Mola in the bell lap before dropping back for a second place finish.

“Kristian gave me one of the toughest runs. Every time I go out I try to race my best, and he made me work. Maybe it was harder than it looked,” Mola remarked. “This race is another step forward. But until I cross the finish line in the Gold Coast in the next couple weeks, the race towards the World Championships is not over.”

Vincent Luis (FRA) and Jonathan Brownlee (GBR) lead out of the 750m swim in the clear and calm waters of the William Hawrelak Park lake, with Marten Van Riel (BEL), Marco van der Stel (NED) and Tayler Reid (NZL) forming a lead pack on the six-lap bike course.  Halfway through the bike, the chase pack caught the lead, with Kristian Blummenfelt and Ryan Fisher working hard to bridge the gap and a massive group converged together moving into transition.

“I thought I had a chance on the run. I couldn’t stay behind him (Mola) I had to try and kick up the pace,” said Blummenfelt.  On some of his recent issues with racing he says, “it felt good to be standing on the start line for a race without problems.”

Behind Blummenfelt was a cluster of runners including early leaders Vincent Luis (FRA) and Jonathan Brownlee (GBR). Fernando Alarza (ESP) and Aussie Jacob Birtwhistle ran with the group of men until the last 500 meters when Birtwhistle broke ahead to sprint himself into a third-place finish.

Birtwhistle shared his thoughts on finding another gear to finish. “I knew it wasn’t over until I crossed that line. I wasn’t given a big gap at the end, but I had to try to use my kick. I would rather use it to challenge for the win, but today I had to try to use it to my advantage. There is so much that can happen, even in a sprint, it isn’t over until we cross that line.

Birtwhistle found the finish line for his third WTS podium of the season. “I wanted to swim and bike to the best of my ability. I am pretty happy with where things are sitting (in the overall standings). I missed a few points early on in Bermuda and Leeds, so I am trying to backend my season to finish off well. I need to perform in the last two events.”

There are two races left in the 2018 season: WTS Montreal and WTS Gold Coast which also serves as the Grand Final. 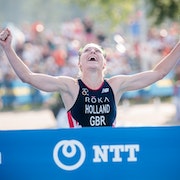 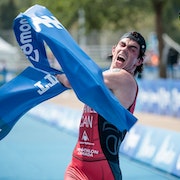 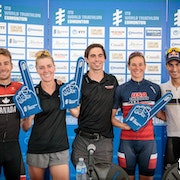 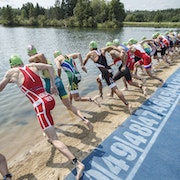