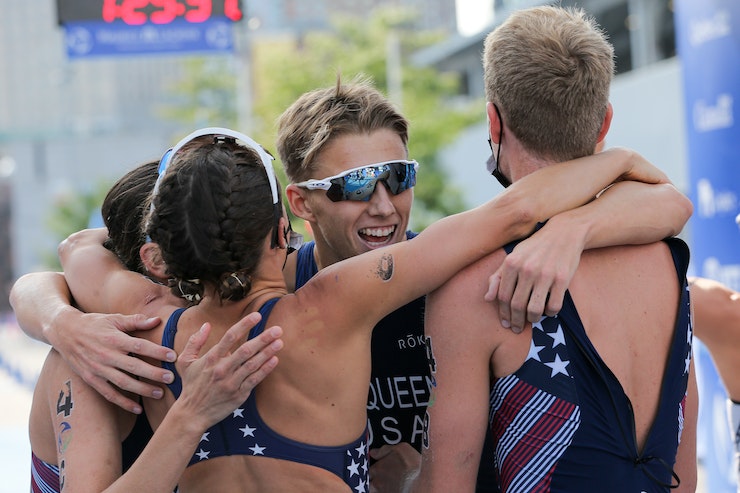 In Mixed Relay terms, Chase McQueen may have been the least experienced man on the USA team at the Groupe Copley World Triathlon Series Montreal, but he delivered a consummate final leg to ensure the USA left with gold on Sunday afternoon. Taylor Spivey had bounced back from her huge effort over the previous two days to set the wheels in motion, Seth Rider picking up the baton for an incredible sixth super-sprint race in 3 days and handing to Kirsten Kasper to tee up McQueen’s vital finish.

It had been a three-way tussle for the podium places for the second half of the race, a young New Zealand side eventually holding off Italy to win silver after Ainsley Thorpe‘s superb effort and Saxon Morgan managed to out-pace Alessandro Fabian.

“It feels really good,” said McQueen, “the team set me up super well, I knew I couldn’t let them down. Luckily, I was in a group of two so I didn’t have the bike by myself and it was all I had until the finish line. Super happy to bring it home for the team.”

“These two did a great job to set me up with a good lead,” added Kasper. “I just tried to hold onto the lead for as long as I could. It was truly a team effort and I am just so proud of everyone.”

“I feel pretty good,” said Rider after his herculean effort over three days. “When you get on the start line and you’re racing for your team you don’t feel anything anymore, you just dive in and go for it and you give it everything you have. I got on the run knowing it was the last race of my weekend, finally and just gave it everything I have, tried to set it up for the team.”

“It definitely wasn’t easy to back up three days of racing, but I think a lot of us are in the same boat, so I gave it all for this team. I am so proud of this team of how the US team raced, the only country with no staff here, they did such a great job and it’s a treatment to how strong these athletes really are.”

—
Fittingly, it was a Canadian that was setting the early pace through the water, Kira Gupta-Baltazar carving through out front with Miyu Sakai also going well for Japan. Spivey was ten seconds back heading up into transition but was soon right on their wheels and driving the pace out front. Emma Jackson had fallen off the back of the pack and wasn’t able to bring it back, while terrible luck with a chain issue on the first lap effectively ended Japan’s challenge, Sakai suddenly off the pace by over a minute.

Out onto the run it was Nicole Van Der Kaay leading Spivey, the only two women making it five races over the weekend and seemingly feeling no effect of their efforts the previous day. Beatrice Mallozzi was right with them for Italy and tagged Gianluca Pozzatti who began his pursuit of Seth Rider (USA) and Dylan McCullough (NZL).

Behind them it was Radim Grebik 10 seconds off the front for Czech Republic, Adrien Briffod (SUI) 5 seconds behind him and Valentin Wernz looking to haul Germany back into contention from a 25-second deficit.

Onto the bike, Rider still had enough in the tank to try and drive on Pozzatti and McCullough, ensuring the chasers couldn’t start to close in. Switzerland and Germany dropped back to 25 seconds off the front and out of transition it was again Rider setting the pace, pulling away for the handover to Kasper.

The Australian dived in just as Kasper rounded the buoy 150m in front of her, the American 15 seconds ahead of Betto and Thorpe, but the two were slicing through the water well and out onto the bike together worked well to catch the leader on lap two. Behind them it was 40 seconds to Germany, Switzerland and Czech Republic and time was running out for the chasers.

Thorpe was lightening through transition and out first, Betto then flying over the opening stages of the 2-lap run to take the lead as Kasper dropped just off the back but always remained in touch while Nina Eim was pulling clear in fourth for Germany and had put 10 seconds into Hruskova hoping to set up Jonas Schomburg for a big finale.

Alessandro Fabian was first into the water for the final time, Saxon Morgan (NZL) on his feet and Chase McQueen (USA) now 9 seconds back, but he soon pulled his way alongside and then past those tow and began the final run up the long route into transition with a slender advantage.

By now it was over a minute to the Swiss and Czech teams, Schomburg giving everything on his own to try and reduce the 30-second deficit but there was nothing he or anyone else could do once McQueen had his bike racked and was out onto the run, the American stretching further and further towards his golden moment and the team that awaited at the finish line.

The battle for silver was being won by Morgan, the New Zealander ensuring a memorable Series debut for himself and McCullough, before Fabian delivered the bronze of the Italians.

—
“It was a pretty cool feeling, pretty hard racing out there but i’m proud of the team and we pulled through for second, so I am really happy,” said New Zealand’s Morgan afterwards. “We mixed up the team today and went through the order of where we should go and I think we nailed it - I am super proud of the team and the effort, added Thorpe.” I am so proud of this team,” said Van Der Kaay. “Our boys have never done anything like this so they really stepped up to the challenge and we’re walking away with a medal, so I am over the moon.”

“Finally, come on, finally! said a delighted Fabian. “Today was amazing, especially with the team, I have to thank them for bringing me in the right position to get the medal for the team. I performed quite well and I am really happy to achieve this finally.”
“It was a really brutal weekend but finally we are really happy with the result,” said Betto. “I tried to do my best, I wanted to be in front from the beginning to the end because it was important for us to try and get this result, so this podium, I am really happy for me and my team.”

The full results can be found here. 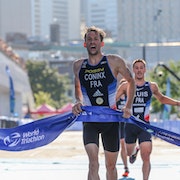 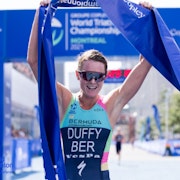 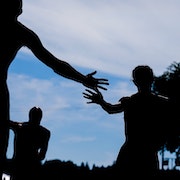