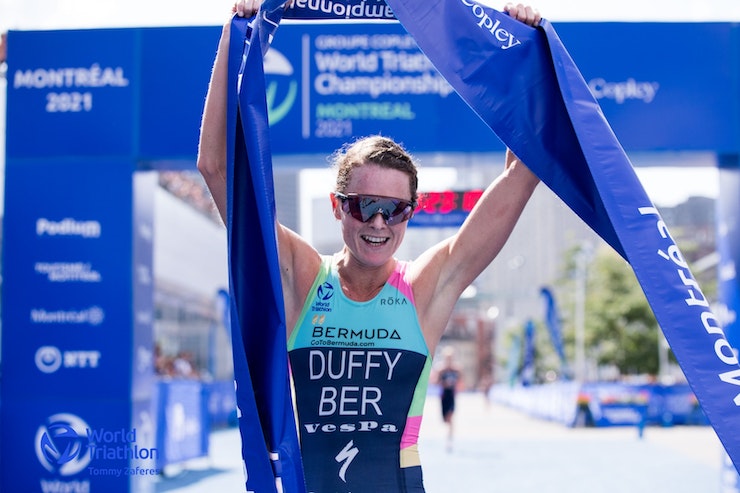 It was only a matter of weeks since her Olympic triumph in Tokyo, but Flora Duffy continued her journey into the triathlon stars on Saturday afternoon as she powered to the Groupe Copley World Triathlon Championship Series Montreal gold.

The format was new, but the result strangely familiar, another big chapter in the ongoing story of the 2021 world title chase as the Bermudian came through the first two elimination races and then held off the best in the world to secure a first WTCS gold since 2018 and vital points that will take her to the top of the Maurice Lacroix Series Ranking with one race to come.

In the final throes, it had been Taylor Knibb again powering through the 7.2km bike as she had all weekend, Duffy and Taylor Spivey for company, but neither could hold on once the Olympic Champion went away at the bell, eventually wrapping things up in true style: with the fastest time of the entire weekend’s six women’s races.

“It was incredibly brutal but it was really nice to do something different,” admitted Duffy. “I have never done this style of racing. I think for me and where I am at with my career, to do something new that makes me nervous and unsure is quite nice and kept things interesting and exciting. As the rounds went on I started to feel better and better, I certainly felt a heck of a lot better than yesterday, that was such a shock to the system. I haven’t done much since the Olympics so that opened my body up and today I felt pretty strong and tried to be as tactical as possible in the first few rounds.

“Taylor Knibb is riding incredibly well right now. She is so strong. I took advantage of that. Her tactic was to go hard on the bike, I didn’t know whether she was as comfortable on the run so I definitely took advantage of that and owe her a lot for that. On the last 2km I just gave it everything. This is actually my first WTCS win since 2018 so it feels good to be on top of this podium.”
—

STAGE ONE
The day began with 30 women lined up and potentially three tough races ahead, Brazil’s Vittoria Lopes leading out of the water as she had twice on the Friday. Lindemann was there too, but Knibb was soon onto the front of the bike and pushing the pace just as she had the day before.

Only ten seconds separated the top 24, Zaferes having to drive a third group chasing a second led by Non Stanford and Verena Steinhauser, themselves losing ground on Duffy, Lindemann and Knibb.

Soon there were 20 athletes vying for the 17 places available in the next round as the bike drew to a close, Knibb never letting up the pace out front and opening up almost half a minute out of T2, Zaferes, Emma Jackson and Stanford the three at the back of the chase pack.

Across the run it was to be Sian Rainsley who edged through with the 20th spot ahead of Natalie Van Coevorden (AUS), Nina Eim (GER) and Lopes off the pace and Alice Betto unable to make it back from a tough place out of the water to miss out too.
Stage 1 results.

STAGE TWO
Out of the water and leading the 20 remaining athletes in race two it was again Knibb and the key was who could stay on her wheel to get through. Eight athletes were together over the first few hundred metres, Stanford and Nicole Van Der Kaay trying to bridge and stay ahead of Anabel Knoll, Audrey Merle and Rainsley trying to get onto them.

For the chasers it was hard work trying to make any headway, Stanford and Van Der Kaay their only targets at the halfway point of the race. Knoll and Merle caught the Brit and New Zealander, the four chasing down the last two spots in the final at the bell.

The gap was 30 seconds to the leaders, Angelica Olmo and Marlene Gomez-Islinger the nearest to that foursome still with slim hopes of the final, but despite her hard work on the bike, Stanford delivered the run that secured her final berth, Van Der Kaay also holding off the challengers behind to finish 10th and snare the precious last spot.
Stage 2 results.

STAGE THREE
Friday’s qualifiers, repechage and Saturday’s first two stages of elimination had all whittled the women’s field down to just ten athletes at the final start line, and there were familiar faces set for one last effort.

Knibb had been in incredible form in the three previous races, taking it on from the front and never relenting on the pace. This time, though, it was Duffy first out of the water with Sophie Coldwell and clearly keen to control how the bike segment played out and make Knibb work to catch up.

Taylor Spivey and Laura Lindemann (GER) were right with those two, but all ten came together over the opening kilometre until Knibb once again took the race on. There was no discernible surge from the American, just an attritional drive over the remaining 6km that slowly saw athletes sliced off the back of the group, Zaferes losing precious ground on the second lap as Duffy and Spivey came through and in mere moments the three suddenly had their opening.

Now Zaferes was trying to drive on the likes of Leonie Periault and Lindemann but without success, the gap 30 seconds as Spivey led the trio into transition and spun out in front. Duffy had dropped back a few yards but the elastic held strong and she closed back in on Knibb.

With the three back together, the bell and the crowd’s cheers was the signal Duffy took to make her final and decisive play. The Olympic champion stretched away, the two Americans locked into a battle for silver until Knibb found an extra gear of her own to drop Spivey and take the silver.

Zaferes finished fourth 9 seconds back and ahead of Periault and Lindemann, Coldwell, Steinhauser, Van Der Kaay and Stanford rounding out the top 10.

—
“Every race was a little different, I was grateful to make it to the last round and just take one race at a time,” said Knibb. “I had no strategy, if anyone was wondering this weekend. My coach just said go out there, have fun and race and I did. I am very surprised and grateful. Congrats to Flora, she ran impressively and congrats to Taylor Spivey, she really made it a fight and I love that.”

“I am really surprised,” admitted Taylor Spivey. “The last few months have been really tough, not making the US team. I have been pretty down these past few months and I am just so happy to come away with a podium in Montreal. I did not know how I would do today. This format is so unusual… I can’t even put it into words. I was really trying to focus on the little things, the transitions and the little intricacies of the race are just so incredibly important.”

The final results can be found here. 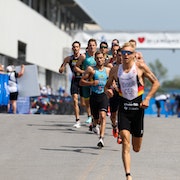 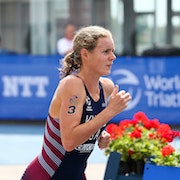 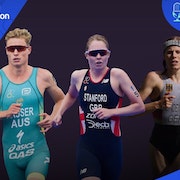 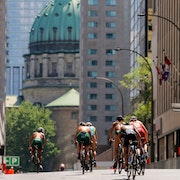