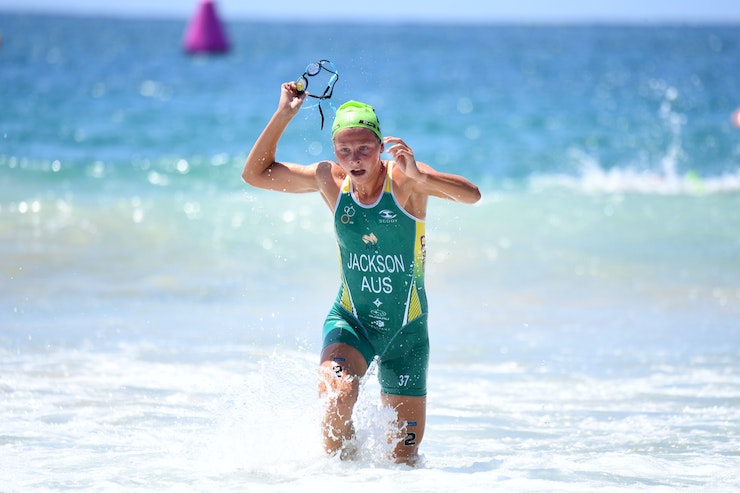 It was double trouble for Australia in Mooloolaba on Saturday, with Emma Jackson and Luke Willian both adding their names to the winners list at the long-running ITU World Cup event. It was the first time one nation has claimed both men’s and women’s Mooloolaba titles since Australia’s Emma Snowsill and Brad Kahlefeldt won in 2007.

Women’s Race Review
Australia’s Emma Jackson returned to the top of the World Cup podium for the first time in four years, with a strong all-round performance leading to her win at Mooloolaba on Saturday.

Jackson was one of the leaders out of the swim and then worked hard in a lead group of six on the bike to establish a gap to the chase, led by fellow Australian Ashleigh Gentle. While Jackson then spent the first lap of the run behind fellow Australian Emma Jeffcoat, the 2012 London Olympian sped up to take to the lead just before the 5km mark and was not headed from there.

She claimed the win in a time of 1 hour 56 minutes and 36 seconds. However she was slightly worried her race was over almost before it started, with a trip up on the beach start.

“I actually fell over running into the surf for the swim but I was fortunate enough to pick my self up and came out in the top two, so that was a good swim for me,” Jackson said. “We had a good group of girls who worked together on the bike and we had a gap back to Ashleigh which I was able to hold onto towards the end.”

“It shows me that I’m in alright form. I actually enjoy sprint distance racing I don’t enjoy the heat too much, with that an Olympic Distance race I thought I was going to struggle a bit. So it was actually really nice to go out there and prove myself wrong and have a good race.”

Jackson’s strong start was key in the In hot and humid conditions on Australia’s Sunshine Coast. Coming out beside Jeffcoat, they joined with Natalie Van Coevorden, Carolina Routier (ESP), Claudia Rivas (MEX) and Natalie van der Kaay (NZL) on the first lap of the bike.

That group then pulled together to push the pace and separate themselves from the chase led by Ashleigh Gentle. A second lap surge took the gap from 25 seconds to 35, and it was then followed up by another on the fifth, when it jumped to 44seconds. By the time the chase group hit the second transition Gentle started almost a minute behind the leaders.

While that was too much of a gap to catch Jackson, Gentle did pull out the fastest run split of the day, 35 minutes and 44 seconds, to run through the field to collect silver.

“I went to a few different places mentally throughout that two hours to be honest, I guess I built that run physically and mentally I felt better as the run went on. Early stages I didn’t even think I would be on the podium so I am really happy with second,” Gentle said.

“I am pretty happy, I was pretty happy to see the finish line to be honest it was a really hot hard race, especially over that course. But Jacko did really well, I’m happy for her. Gold Coast will be a hotly contested race in four weeks time.”

It was Rivas’ second ITU World Cup medal, her first came on a course with similar hot and humid weather in Huatulco and she said she enjoyed the conditions.

It marked Jackson’s third ITU World Cup win, after two titles in Tongyeong in 2013 and 2014. Jackson had spoken before the race how missing out on Rio Olympic selection had been a driving force to get back to her best.

The win was the 13th ITU Triathlon World Cup in Mooloolaba and Jackson is the fourth Australian women to add her name to the winners list, alongside Erin Densham, Emma Snowsill, Loretta Harrop and Annabel Luxford.

After a tough swim and bike in hot, humid and windy conditions in Mooloolaba, Willian pulled out a final lap surge that was enough to hold off fellow Australian Drew Box and New Zealand’s Sam Ward. Willian won in a time of 1 hour 43 minutes and 48 seconds.

“That’s been the goal for me getting to that race, and I’ve just done that,” Willian said.

The swim also played an important role in the men’s race, with a lead group of 11 getting away quickly from T1. That group, which included Tommy Zaferes, Kevin McDowell, Michael Lori, Sam Ward,, Jumpei Furuya and others, worked strongly together to extend a gap to the chase, led by Crisanto Grajales. After sitting at around 40 seconds for the first few laps, the leaders extended that gap to 1:40 at T2.

From there it was Lori, Box, Ward, Willian and McDowell who pushed the pace. With one lap to go Lori dropped off the leaders slightly, and it seemed set up for a sprint finish. But it was Willian that took the initiative on the hill and strode away for the first World Cup win of his career. Willian was the first Australian man to win the event since Brad Kahlefeldt in 2011.

Box finished second but noted it was bittersweet.

“Mixed emotions actually, I needed to come first of the Aussies to get the spot to trial for Commonwealth Games. But I couldn’t have done anything more, I stayed up there as long as I could. It came down to maybe the last kilometre, Luke got in front of me,” Box said. “Luke is a good mate of mine so for him to win I couldn’t be happier, and it’s another podium for me. I’m doing better than I ever have, so if I can keep getting podiums I will be happy with that.”

“I gave it everything I had, but I just couldn’t get that win. But I’m really happy, managing to stay away. I was stoked about that, to get in that front group, we worked really hard,” Ward said.

Behind them Grajales recorded the fastest run split of the day, 31:15, to run his way up to fifth spot. 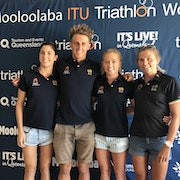 The 2017 ITU World Cup series heads back down under to Mooloolaba this weekend. Ashleigh Gentle, Emma Jackson, Jaz Hedgeland… 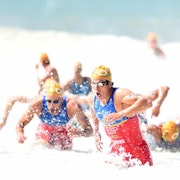 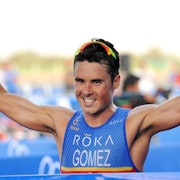 In the 2017 ITU World Triathlon Series season opener in Abu Dhabi, Spaniard Javier Gomez returned to competition with his… 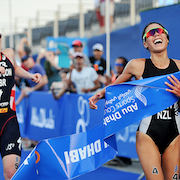 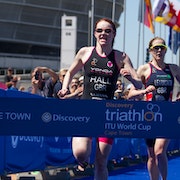