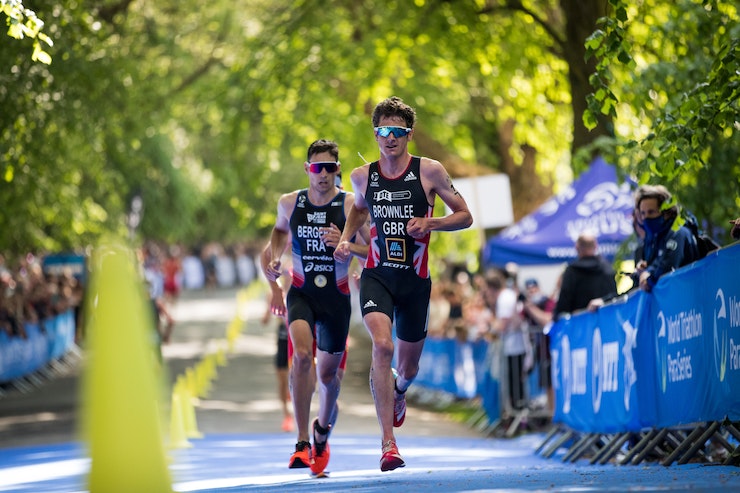 It was less than a year ago that the Olympic champions were crowned in Tokyo but the road for the next one in Paris has just begun. The best triathletes of the world are heading this weekend to Leeds for the second round of the World Triathlon Championship Series in 2022, the first one that will give points for the Olympic Ranking. Everything is ready at Roundhay Park for the sixth edition of the AJ Bell Leeds, that this year will see athletes competing over a sprint distance on a hard, technical and hilly course around Waterloo Lake.

Wearing the golden number 1 this weekend will be the current leader of the Maurice Lacroix World Triathlon Championship Series Rankings Leo Bergere. The Frenchman has been one of the most consistent athletes in the last year, finishing on the podium in four of the five last Championship Series races, but has never been able to be the first one crossing the finish line. He seems to be more than willing to take his chances this weekend, even though the task won’t be an easy one, with some of his teammates having shown strong credentials lately. The French team arrives in Leeds in full swing, with six men currently in the Top 20 of the Maurice Lacroix World Triathlon Championship Series Rankings, and all of them on a position of fighting for the podium: Leo Bergere, Pierre Le Corre, Paul Georgenthum, Vincent Luis, Dorian Coninx and Tom Richard.

Two-times World Champion Vincent Luis will be a hard one to beat in Leeds, after the disappointment of not finishing WTCS Yokohama. Luis had to stop after he felt a high heart rate during the race in Yokohama. After being checked by doctors back in France, he has been given the green light to race and is fully motivated to earn the first Olympic points on the road to Paris 2024.

It won’t be an easy task for any of the French athletes to beat local hero Jonathan Brownlee on his playgrounds. The Brit showed magnificent form two weeks ago winning the first World Cup of the Olympic Qualification cycle in Arzachena. He has raced in Leeds five times but never crossed the finish line in first place, but he knows the course by heart and if it all comes to a run race, it won’t be easy to beat him when he will be cheered by hundreds of spectators.

One that could be possibly be claiming the spectator’s love will be indeed Alex Yee, in full form after his epic battle against Hayden Wilde in Yokohama. It was only a year ago where the Brit claimed his first-ever victory at the World Triathlon Championship Series here in Leeds, and the young star seems to be more than ready to repeat this year, same location but Sprint distance instead.

Wilde on his side will be another one to watch, with the course and distance perfect for the Kiwi to test his form ahead of the Commonwealth Games this summer. Other fast runners like Antonio Serrat Seoane (ESP), Marten Van Riel (BEL), Jacob Birtwhistle (AUS) or Matthew McElroy (USA) will try to show up for the day, knowing that some rising stars like Manoel Messias (BRA), Vasco Vilaca (POR) or Matthew Hauser (AUS) also have the speed to make a difference.

Leeds will see the return to the WTCS circuit of Gustav Iden (NOR), the two-times 70.3 Ironman World Champion, and Jelle Geens (BEL), winner in Abu Dhabi 2021 but out injured in the first races of the 2022 season. Another athlete coming back to the circuit will be Richard Murray (NED), on his first-ever Series event after switching nationalities, now competing for The Netherlands.

The blue carpet is set and the athletes are ready, with some of them also preparing to perform on Sunday in the Mixed Relay event. The men’s race will get underway on Saturday at 14h local time, and you can watch the race live on TriathlonLIVE.tv.