Back in action:
While the men’s reigning Olympic champ has endured injuries that rendered him to the sidelines much of the last two years, the word on the street is that Alistair Brownlee has enjoyed a solid winter of training. And if Alistair put in work these last few months, that means younger brother Jonathan Brownlee reaped the benefits of a healthy world class training partner. Conclusion? That ole Gomez vs. Brownlee rivalry just got exciting all over again in a big kind of way. Return of the medallists:
Speaking of Olympic champs back in action, expect Nicola Spirig to mix it up in a few more triathlons this year. While her season is to be determined, when Spirig is lined up, look out. And to continue on the Olympic medallists thread, Lisa Norden is looking like she’s in the hunt for Rio, as well. After stepping up to longer distances and suffering from a foot injury, Norden is back to training with the coach that got her to Olympic silver. Bronze medallist Erin Densham is on the start list for the Mooloolaba World Cup, so here’s hoping these ladies are all back in form.

Red hot:
It goes without saying that Gwen Jorgensen and Javier Gomez Noya had stellar years in 2014. Barring any unforeseen circumstances, don’t expect the World Champions to slow down anytime soon. They are the ones to chase this year and will no doubt be up for the challenge.

Stepping it up:
Last year saw some major performances from the likes of Mario Mola, Richard Murray, Joao Pereira, Vincent Luis, Sarah True (nee Groff), and Kirsten Sweetland to name a few. Add in the always consistent Andrea Hewitt and Emma Moffatt, as well as Commonwealth Games champ Jodie Stimpson, and they make up a sizable group of WTS athletes that stepped up their ante last year and could just change the game in 2015.

Outside smoke:
Women’s racing could see some big shake downs this year with some star players appearing to be back in form. Paula Findlay looked especially promising towards the end of last year. Training with none other but the studly Siri Lindley, a world champion turned coach to world champs, Findlay has more WTS wins than any other woman other than Jorgensen.

Not many woman can match Jorgensen’s dynamic run speed, but one that may be up to the challenge is 2013 queen Non Stanford. The Brit watched from the commentator’s box much of last year, but here’s hoping injuries are healed up and we’ll see her racing soon. Anne Haug, who mixed it up in the 2013 season and missed much of 2014 due to injuries sustained from a bike crash, is now looking fit as she trains with the wondrous Wollongong Wizards. Helen Jenkins sat the second half of the season out last year, but proved early in the year that she can do damage to the field when she’s healthy. Not gone and not forgotten:
After finishing 18th at the Olympic Games, the two-time Australian Olympian Courtney Atkinson went long and off road with success. But he recently announced his intention to stamp his ticket to the Olympics for a third time meaning this guy is back in ITU action. While four-time Olympian Hunter Kemper never strayed far from standard-distance racing, look for him to ramp up his event entries as he attempts a berth at a fifth Olympics. If he can make it happen, he will be the only athlete to have competed in five Olympic triathlons, which will be every Olympic triathlon ever contested.

New Kids on the Block:
Keep an eye on Germany’s young Sophia Saller and Laura Lindemann. Despite just a few years of tri experience on her CV, Saller scored second only to Spirig at the 2014 European Championships, and followed up with an U23 World Champ title. Likewise, compatriot Lindemann rocketed to a Junior world title with some very impressive backend speed that will serve her well in the current WTS style of racing. France’s Cassandre Beaugrand, Audrey Merle, Dorian Coninx, and Raphael Montoya all made strong impressions towards the end of the season. While the younger athletes likely won’t line up at many WTS races, they certainly painted themselves as the future of the sport. 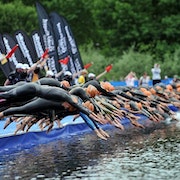 With the World Triathlon Series kicking off in just over a week, we break down what to look for this season.