The final Team ITU event of 2012 was designed to help its athletes push towards the London 2012 Olympics, and while they did just that, they know the battle is not just over yet. In the elite women’s race, Yelistratova posted the fastest run of the day 36 minutes and 58 seconds - to cut into a three minute lead from T2 and claim seventh place, with Simic just behind her. The points for both were enough to not just hold on for the Olympic simulation, but move further ahead. For Simic, it was a nice symmetry that Huatulco might seal her Olympic spot, as its where she first entered the Olympics simulation picture last year. But the journey to make the Olympics isn’t quite over yet.

“Last year after Huatulco I came into Olympic rankings and I held that the whole winter, but because I was only racing the second year of Olympic ranking, I didn’t know if I could get there in the European new flag spot,” Simic said. “Now after this result in Huatulco, I have am a chance to be in the Olympic qualification points list, but I still must race well in Madrid and San Diego.” It was a sentiment echoed by Quinchara Forero, Colombia’s top ranked male athlete. Colombia have had female athletes qualify for the Olympics before, but Forero would be the first male if he qualified for London. He finished fifth, his equal highest World Cup result, but it wasn’t quite enough to reel in Gonzalo Tellechea, who knocked the Colombian out of the American new flag spot with bronze in Ishigaki.

“My process start last year, when I finished ninth in Monterrey and that gave me a real chance at qualifying for the Olympics in the Americas new flag. Then I finished fifth in Guatape, then I thought I was really close but then I got an injury and I couldn’t race and I lost the Americas new flag,” Forero said, “But now I finish fifth, now my chances are to do really good races in San Diego and Madrid and finish ahead of the guy ahead of me. So I have to do good races in San Diego and Madrid.”

St Louis currently holds the African new flag spot, and will become the first athlete from Mauritius to compete in triathlon at the Olympics in London if all goes to plan. She said the support from the ITU Development programme had been crucial.

“To be part of Team ITU brings to me a good spirit because I’m from Mauritius, there’s no team, I’m the only one racing international races,” she said. “ITU gave me opportunity to do international races since three years now. With those races I can get points if I am in the ranking and in the top percentage of the race. To get one team like this, to feel like a big team which have a lot of athletes and coaches and everything, we have a good spirit.”

Elizabeth Bravo on Team ITU’s team spirit: “Before the race, Mateja helped me a lot because all the time she say to me, ‘You can do it, you can do it.’ It’s so great for me. She’s my room partner and thank you to her.” Mateja Simic on Team ITU: “We are competitors, but also friends. We want everyone to have the success.”

Chacon, who has been part of Team ITU for the entire four year Olympic preparation period, had already wrapped up his Olympic place but another top 15 finish in Huatulco helped secure it further. He said overall, he couldn’t have done it without the ITU Development programme.

“Being part of this group has been an amazing experience for me, it’s helped me pretty much, I’m already in London with my spot. I’m ranked 37 right now in the rankings, but it’s helped me a lot, because with the ITU team we don’t just have the flights to the races, we also get a big opportunity to participate as a real team, having doctors, physios, coaches, who helps really much before during and after the race,” Chacon said. “That’s the most important thing, and I think without them I wouldn’t qualify for the Olympics. It makes everything easier when you are travelling with them.” 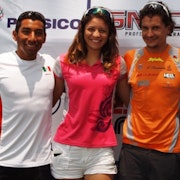 It's the final Team ITU event for 2012, as well as the final World Cup of the Olympic Qualification period, so take a look at…

Five years ago, Team ITU was simply an dream. In Auckland this week, the team is celebrating five years of making dreams come…