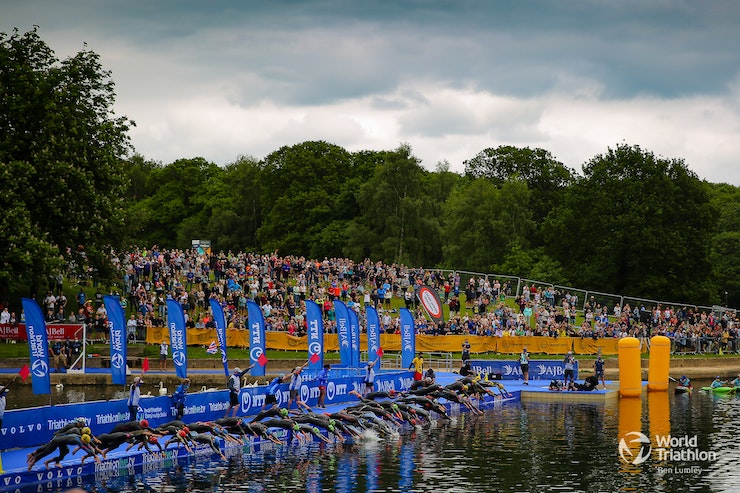 The magnificent green fields of Roundhay Park, in Leeds, are ready to welcome the best triathletes of the world for the AJ Bell WTCS Leeds this weekend, with a powerful British squad ready to claim the title on home soil. With the race being contested now over a sprint distance -750m swim, 20km bike and 5km run-, get ready for some fast and furious action around Waterloo Lake.

Two-times Olympic medallist Georgia Taylor-Brown will have the privilege of lining up wearing the golden number 1, the one reserved for the leader of the Maurice Lacroix World Triathlon Championship Series Ranking Leader. She earned the spot with her victory in WTCS Yokohama a month ago, but is more than willing to prove once again that she will be a hard one to beat this season. A magnificent swimmer, all eyes will be set on her from the gun, and if it all comes down to a run race, it won’t be easy to beat her.

Taylor-Brown will be leading a powerful Brit squad that has currently another three women sitting in the top 15 of the Maurice Lacroix ranking, apart from herself: Sian Rainsley, Beth Potter and Sophie Coldwell. neither of them has ever podium in Leeds before, but they know for sure what it takes to perform on the day.

Olympic and current World Champion Flora Duffy (BER) will be looking forward to restarting pursuit of what would be a historic 4th world title this weekend. Her second place in WTCS Yokohama earned her second place in the 20222 Series Rankings, and if she is able to get out of the water with the front group, she will be challenging to follow on this hard bike course.

The French female team will be a strong one as well, with a run course that seems to be designed for fast runners like Cassandre Beaugrand or Leonie Periault. Periault is one of the more consistent athletes in the last year, with two WTCS podiums already under her belt and looking for the first victory of her career this weekend. Another French woman looking for redemption this weekend will be Beaugrand, who was unable to finish the race in Yokohama after a crash on the bike and is looking for her first Olympic points on the road to Paris 2024. Even though rising star Emma Lombardi is skipping Leeds to rest, the Bleus will line up Audrey Merle, who finished in 14th place in Yokohama.

Strong bikers like Maya Kingma (NED), Lotte Miller (NOR) or Emma Jackson (AUS) might also have their chances if they manage to stay near the front group when they come out of the water after the one-lap swim, with a wetsuit swim expected as usual in Leeds.

Team USA will line up a combination of newcomers to the big scene with classic names on the circuit. None of them have ever podium before in Leeds, but the hard and technical bike circuit suit perfect strong bikers like Kirsten Kasper, while the fast 5km run will be perfect for runners like Summer Rappaport, Taylor Spivey or Erika Ackerlund.

Talking about fast runners, the likes of Miriam Casillas Garcia (ESP), Vitoria Lopes (BRA) or Laura Lindemann (GER) will be looking for their chances, but it will be worth to keep an eye on some of the young guns lining up in Leeds: Alberte Kjaer Pedersen (DEN), current silver medallist in the U23 World Champs; Lisa Terch or Nina Eim (GER) have the speed and the strength needed to perform well in Leeds.

The elite women will get underway on Saturday at 15.45pm local time, and you can watch all the action live on TriathlonLIVE.tv.