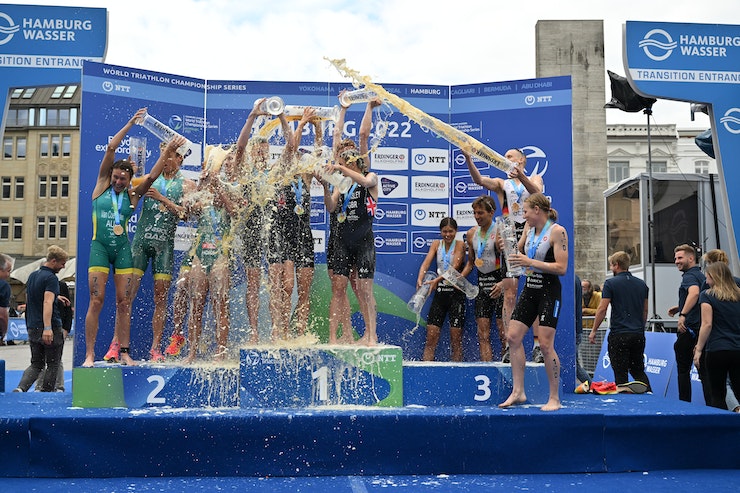 On another glorious afternoon of triathlon at its best, Team Great Britain claimed their second Mixed Relay win this season, with Kate Waugh running past local favourite Laura Lindemann, from Team Germany, who had to serve 20 seconds penalty, just a few meters before crossing the finish line. Natalie Van Coeverden, from Australia, saw the drama unfold right under her eyes, and managed to also pass by Lindemann to claim the silver medal in Hamburg, Team Germany holding on for the third place.

The mix of power and speed of the Triathlon Mixed Relay took once again the streets of the Hamburg city center for the 2022 Hamburg Wasser World Triathlon Championship Series Mixed Relay, with thousands of spectators on the streets ready to enjoy the pure joy of one of the most iconic events on the World Triathlon calendar. Eighteen teams lined up this Sunday, after the last minute drop outs of team Netherlands and Team Portugal, both of them with athletes injured after the individual races on Saturday. On the line ups, a combination of new faces and well-known names ready to take the stage for the Hamburg-classic 300m swim, 7km bike and 1.7km run course of pure drama all the way to the tape.

With the change introduced this season, it is now the men who are in charge of diving in from the pontoon, with some teams choosing their top guns for the first leg of the relay, willing to make an impact in the race from the first meters. That was indeed the plan of Chase McQueen (USA), who led the 18 men out of the water along with young Canadian Brock Hoel. Neither of them knew by then that their efforts wouldn’t take them very long, Macqueen had issues with his chain right after transition, and he was then passed by the whole pack, while Hoel had a flat tyre a few meters later, his team not able to continue the race.

Meanwhile, Hayden Wilde (NZL) took control of the race as soon as the men were on their bikes, and imposed a fast a furious pace that was just not feasible for some of the teams, Italy was soon dropped, and Manoel Messias and Jelle Geens tried desperately to catch up with the leaders before making it to the second transition, but with not much luck.

Valentin Morlec (FRA) was the first one to get on his shoes, followed by New Zealand, Switzerland, Germany and Australia, with Igor Bellido (Spain) managing to avoid a transition crash, Andreas Carlsson right behind him not so lucky.

It was Wilde the one tagging his teammate Nicole Van Der Kaay first, with teams Switzerland, Australia and Japan following close behind, and by now the chances of Team USA were gone, Taylor Spivey second to last when she was tagged. She did a massive effort to try to get her team back in the game, but it was not an easy task. Almost one minute ahead of her, the race was unfolding with Sian Rainslay doing a magnificent swim that pout Team UK back in the lead group, along with New Zealand, Australia, Hungary, Germany and France.

It as when the athletes were about to finish their bike segment when Lisa Tersch (GER) received a 10 seconds penalty for swim conduct, forcing her team to try what they could to try to take a bit of advantage to be able to maintain the leading positions. The group stayed together, though, for the whole bike section and the two laps of the run, with small differences among them until Rainsley was the one tagging her teammate Samuel Dickinson in the first place. Another consistent swim had him leading out of the water, with Hungary, Australia and Germany close behind, while Switzerland, Denmark and New Zealand were in the chase.

It was another Kiwi, Dylan Mccullough, who decided to make his move then and tried to breakaway on the bike, and by the time the group behind him started to get organised, he had a few seconds of a lead, that he kept until they dismounted. He had an easy transition, as did Matthew Hauser for Team Australia. Not the case of Lasse Nygaard-Priester, who stepped over the dismount line still on his bike, which lead to a second penalty for Team Germany, both to be served by their last athlete, Laura Lindemann.

With that thought on mind. Hauser went full gas from the moment he had his shoes on and started opening a significant break, with Team UK and Team Switzerland close behind him, and New Zealand and Germany fighting for the podium positions.

By the time Hauser tagged his teammate Natalie Van Coevorden, she had a lead of 11 seconds, which she managed to keep even though she had to swim by herself with two fantastic swimmers behind: Lindemann for Team Germany and Kate Waugh for Team UK. Van Coevorden mounted her bike also solo, but soon enough she just slowed down a bit to join her two chasers, trying to save some legs for the run, especially knowing that Germany would have to stop for 20 seconds before crossing the finish line.

Waugh and Lindemann started a frantic run and Van Coevorden was dropped a few meters, with the two leaders on sight and knowing that behind her Julie Derron (SUI) and Andrea Hansen (NZL) were chasing. The three leaders headed the last lap of the run knowing that the drama was about to unfold under the eyes of the hundreds of spectators and indeed it did. Right before they hit the blue carpet, Waugh and Lindemann shoulder to shoulder, the German stopped in the penalty box for what surely were the longest 20 seconds of her life, while Waugh headed alone to take the tape.

Also Van Coevorden passed by Lindemann while she was stopped by the officials, to claim silver, but Lindemann managed to keep her third place and sprinted to hug her teammates in the finish line, taking the bronze medal.
Behind them, Switzerland and New Zealand closed the top five of the day. Hungary finished strong in the 6th place, followed by Emma Lombardi (FRA) on an unusual 7th place for Team France on a Mixed Relay race.

Barclay Izzard said: “I just tried to do my best, get Sian (Rainsley) in a good position and everyone else was amazing as well. “I got strict instructions not to get a penalty for the team but just so happy we got across the line for the team, that was textbook relay. We’re a young team, we may not be the A-team but certainly the future is looking bright for British Triathlon, ” said Samuel Dickinson. Kate Waugh explained that she was “aware (that Laura Lindemann had a penalty) so I just had to stick with her, I knew she would pull off at some point. I am so excited, I am so happy for us all”.

“It was great. I got really set-up by Luke and Sophie early on and Nat (Van Coevorden) finished really strong so I am just really stoked to be on the beer shower again today,” said Hauser. “They put me in such a good position and I knew if I stayed there we had a good chance of the podium today so I am really glad we’re back and it’s great to be part of such a great team. I don’t think we ever left, we’ve always been here and I think we’re really persistent and never give up and I think that really showed today and hopefully we can lead this towards Paris and we have many, many good athletes to lead us with a great team and I am really proud of everyone today,” explained Van Coevorden.

“It felt so long (20-seconds in the penalty box), I was like is it over, is it over. It was a long penalty”, said Lindemann. “That was not cool, we got away with a medal, great to be on the podium in Hamburg and I think that we showed that we are a strong team and we are meant to be in the front”. 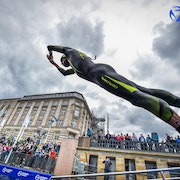