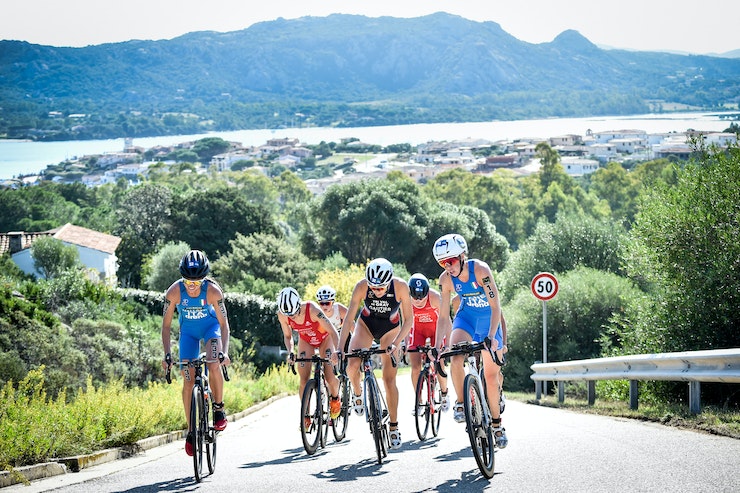 Back in October 2020, as Arzachena made its first appearance on the World Triathlon circuit, Flora Duffy delivered one of those jaw-dropping displays of grit and power that you just have to step back and admire. The Bermudian led out of the water and raced solo to the tape, but only three of last year’s top ten return this weekend; home favourite Verena Steinhauser, Germany’s Lisa Tertsch and Denmark’s Alberte Kjaer Pedersen.

They will have mixed memories of a challenging sprint-distance course that has one of the toughest bike climbs ever seen on the circuit. The long and winding road snakes up out of the town centre to the dusty hilltops, and the descent will be just as challenging as the stronger cyclists will look to assert themselves at speed back down to transition.

You can watch all the drama unfold on TriathlonLive.tv
—

It was Steinhauser who managed to outpace the likes of Katie Zaferes, Angelica Olmo and Leonie Periault over the final 2km to take a memorable bronze, and there can be little doubt she will have ambitions of an even better finish this time around.

The number one will be worn by Vendula Frintova, however, the Czech all set for a fourth Olympic appearance in July. The hill climbs should provide exactly the kind of challenge she relishes, and Karlovy Vary gold in 2019 will feel like a long way back for an athlete who sets herself big targets and is used to finding herself challenging for medals.

Brazil’s Vittoria Lopes returns for her first individual race of the year having seen her Mixed Relay hopes cut short in Lisbon before her leg had even begun. That could provide the extra motivation she needs for a big performance here as she looks to rekindle her flying form of 2019.

Ecuador’s Elizabeth Bravo makes her first start for nearly 18 months, that last race in Mooloolaba ending with a tight fifth-place finish after a battle against Ashleigh Gentle and Andrea Hewitt, and a third Olympic appearance is in the balance with only three qualification races left for Tokyo.

Yuliya Yelistratova (UKR) and Julia Hauser (AUT) both know how to secure a podium finish at this level, the Ukrainian winning in Salinas back in 2018, Hauser taking bronze the year before in Florida but arriving in Italy flushed with a superb fifth-place finish at WCTS Yokohama.

Germany’s Lena Meissner and Caroline Pohl join teammate Tertsch in a German squad full of promise for a grandstand finish, the latter eighth here in 2020 and surely among the favourites for a second gold at this level after victory in Antwerp two years ago.

Norway’s Lotte Miller will certainly feel like this could be the weekend she scores a career-first podium after some strong Series top tens, the likes of Kaidi Kivioja (EST) and Chile’s Barbara Riveros also undoubtedly with the potential to podium on Saturday morning.

Like Riveros, Spain’s Carolina Routier has vast experience to call upon as she returns to the start line, Canadian duo Emy Legault and Dominika Jamnicky also arrive with mixed fortunes from Lisbon ready to do battle in Arzachena.