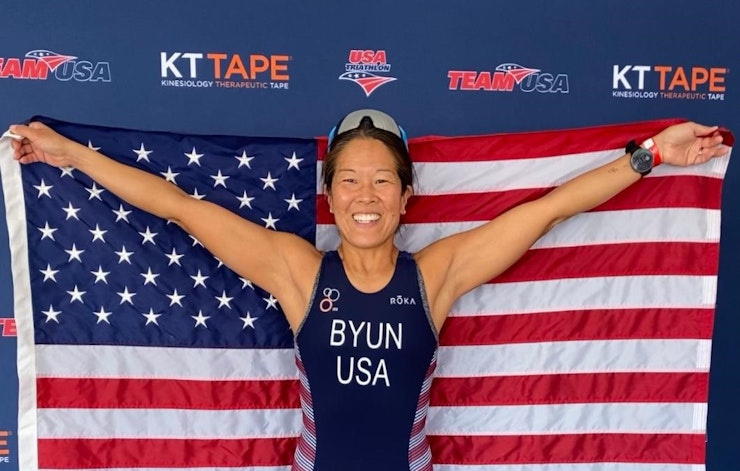 Sharon Byun started Triathlon at the age of 43 and has been representing USA at the Age-Group World Triathlon Championships level since 2017, having competed in 2017 having competed in Rotterdam, Netherlands (2017), Gold Coast, Australia (2018), Lausanne, Switzerland (2019) and Montreal, Canada (2022).

Sharon is looking forward to lining up at the 2022 World Triathlon Age-Group Championships in November. “I would say that I am pretty proud that I have been able to qualify for Team USA every year since 2017 and achieve Age-Group All-American Status (top 10% age-group ranking in the US) for 6 years.”
In a world that feels highly politicized and divisive at times, it is incredible to feel unified in the spirit of competition.  One of my favorite quotes when I visited the Olympic Museum in Lausanne was “United in our diversity, we are stronger than all of the forces that try to divide us.”

How did you get into multisport / Triathlon?
I competed in my first triathlon in 2012 at the age of 43. My friend Pippin Gilbert and I had trained for a half marathon and decided to enter a local sprint distance triathlon on a whim. I had run somewhat competitively in high school and had swum on my high school swim team, but it had been over 25 years since I had swum laps in a pool. I had never ridden on a road or triathlon bike before. Training for multiple disciplines allowed me to remain active when I was sidelined with running injuries, and I was completely hooked on the sport after my first race.

Have you been involved in a World Championship before?
I have been a member of Team USA since 2017 having competed in Rotterdam, Netherlands (2017), Gold Coast, Australia (2018), Lausanne, Switzerland 2019 and Montreal, Canada (2022). Unfortunately due to COVID, the World Championship events were cancelled in 2020 (Edmonton, Canada) and 2021 (Hamilton, Bermuda). It is an honor and a privilege to be able to represent the US and compete as an age-group athlete. Having the opportunity to represent our country in international competition creates an immediate bond. I’m sure this is something that is not unique for US age-groupers but for athletes all over the world. You cannot help but feel an immense sense of patriotism when you put on your Team USA uniform and walk in the Parade of Nations and attend opening and closing ceremonies and of course compete!  All of the athletes serve as ambassadors for our respective countries. In a world that feels highly politicized and divisive at times, it is incredible to feel unified in the spirit of competition.  One of my favorite quotes, when I visited the Olympic Museum in Lausanne, was “United in our diversity, we are stronger than all of the forces that try to divide us.”

What would you consider your best achievement to date?
I would say that I am pretty proud that I have been able to qualify for Team USA every year since 2017 and achieve Age-Group All-American Status (top 10% age-group ranking in the US) for 6 years. I raced in my first 70.3 last year and was able to qualify for the Ironman 70.3 World Championships in 2021 and 2022 although I elected not to race in 2022. One of my favorite triathlon races outside of World Championship events has been the Escape From Alcatraz Triathlon where I placed 2nd in my age group in 2019. I also competed in my first full-distance Ironman this past August in Juneau, Alaska which was an incredible experience. All of these achievements would not be possible without my family, my coach, and my training partners. I am very grateful to have a supportive husband and son, a fabulous local triathlon community, and my amazing coach Karyn Austin who has been coaching me since 2014.

What’s the best part about Triathlon?
I think I echo the sentiments of most triathletes when I say that what I love most about triathlon is the welcoming, supportive, inspirational and fun community of people I have had the privilege of training and racing with not only locally, but also nationally and around the world.

What does your weekly training schedule look like?
I swim 3-4 times per week (MWF and Sat) with a masters swim group called Swamp Water Aquatics Gainesville which is coached by Karyn Austin. I strength train 2 times per week, typically on Mondays and Fridays. I usually do some sort of interval bike trainer workouts on Tuesdays and Thursdays +/- a brick run afterwards. Speed work on the track is once a week and then long group rides and runs on the weekends. I also do Pilates and yoga several days a week. As I have gotten older (now age 53), I realize how important strength training and mobility work are to keep me healthy, especially with running. My favorite part of my training schedule is definitely swimming with my masters swim group. The group has had tremendous growth over the last several years due to the incredible hard work, passion and dedication that Karyn has. Swimming is my favorite discipline among the 3 and is a relative strength for me as far as triathlon goes. I’m definitely not as fast as I was back in high school, but I am faster now than I was 10 years ago.

Who is the most inspiring person you’ve met through the sport?
There are so many people who have inspired me over the years through triathlon, but I would have to say that 2 people have especially inspired me this past year. One person is Khadijah Diggs. She embodies the “never give up” mantra and inspires all who have the great fortune to know her. She is the first African-American woman to be a member of the US Long Course Triathlon Team and the first Hijabi to represent the US in any Multisport event. She is the founder of Diversity Infusion Syndicate, a non-profit dedicated to promoting Excellence and Sisterhood through the sport of triathlon as well as to diversifying the landscape. Her mission is to promote a positive image of Muslim women and Islam in general through sport. She wants to change the world one race at a time.

To learn more about Diversity Infusion Syndicate.
.
The other person who I have been inspired by is Dan Anderson. Dan lost his mom to B-Cell Lymphoma when he was 8 years old. Now in his 40’s, he started the Lymphoma Research Foundation (LRF) Triathlon Team this year to honor his mother, raise awareness and help support lymphoma research efforts. He recently competed at Ironman Florida alongside his father, R David Anderson, and both of them achieved podium finishes, Dan placing 5th in the 40-44 AG and securing a slot at the 2023 Kona Ironman World Championships and Dave placing 2nd in the 65-69 AG, just missing Kona qualification by 1 spot!

How much does it mean to you to represent USA at a World Championship level?
Representing my country means everything to me. I know it may sound corny, but America is truly the land of opportunity. I am the daughter of immigrant parents who came to America in the hopes of creating better lives for themselves. I was raised by parents who sacrificed everything for their children and raised us to believe in ourselves, to believe that hard work will bring success and to be hopeful and optimistic for the future. I see this philosophy and work ethic in my teammates. USA Triathlon has an amazing team of managers, coaches and support staff that make their athletes proud to be part of this organization and represent our country.

What makes the experience so special?
Over the years, I’ve met so many amazing women and men who have become close friends. Since we are spread out all over the country, we really look forward to a fun-filled reunion at every World Championship. 2020 and 2021 were difficult for all of us for so many reasons, and not having had World Championship events the last couple of years has made the 2022 races even more meaningful.

What is your goal for Abu Dhabi?
I have been plagued by running injuries over the past several years, and I have finally been able to run consistently the past couple of months, so I am looking forward to seeing what I can do with my run. Really my goal is to race to the best of my ability and enjoy the trip with my husband and son. I am also looking forward to the Thanksgiving dinner that Team USA has organized for all of us!

Why Triathlon?
Definitely the community of people!!! What I love about the triathlon community is the power of positive thinking and strength and inspiration that I encounter on a daily basis. Training and competing in triathlon has become a way of life for me. I am healthier and more fit in my 50’s than I was in my 30’s and 40’s and hope to encourage and inspire others. To be able to compete as an amateur age-group athlete at an international level representing my country is an added bonus that I never dreamed would be possible!

Who do you think will win the Elite titles in 2022?
Flora Duffy for the women and Alex Yee for the men.

Review the Age-Group start lists and watch the races in Abu Dhabi over on TriathlonLIVE.tv, 24-26 November. 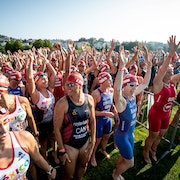 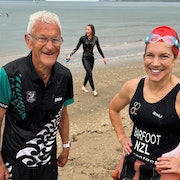