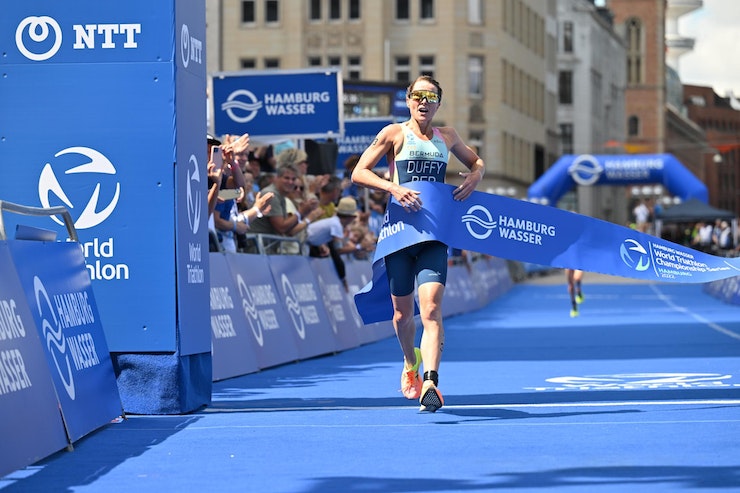 Flora Duffy‘s performance this Saturday to claim the victory for the fourth tie in Hamburg will be one to remember. The current Olympic and World Champion stormed the field to beat in the last 300 meters Beth Potter (GBR) despite having to serve a 10 seconds penalty. Germany’s Lisa Tersch crossed the finish line in third place for much delight of the thousands of spectators that cheered in the iconic Rathausmarkt square to grab the first World Triathlon Championship Series podium of her career.

It was back in 2002 when Hamburg made its debut as host of the world’s best triathletes, and exactly twenty years later 55 athletes lined up in the same scenario ready for a day full of triathlon action, with some of the greatest females athletes of the sport ready to set their feet in the iconic stage. The sprint-distance course in WTCS Hamburg starts with a 750m swim in the Binnenalster lake that features a dark, 40m tunnel section under the pedestrian bridge on the way back towards an imposing transition area in front of the city’s iconic Rathaus. From there, it’s a flat and technical 6-lap bike of 21km before the 2-lap run brings another 5km of high drama to decide the medals.

And from the gun, it was American great swimmer Summer Rappaport taking the lead from the first strokes, looking forward the make it to the dark tunnel leading the pack, just to avoid the weird feeling of swimming not seeing who you have in front. She stretched the pack, followed by some other great swimmers like Vittoria Lopes (BRA), Sian Rainsley (GBR) or Jolien Vermeylen (BEL), and by the time they made it to the stairs that lead to transition, they had a long line of athletes ready to sprint to get on their bikes right behind them.

The leaders out of the water were quickly joined in the blue carpet by Flora Duffy (BER), and a full squad of German athletes, Anabel Knoll, Lisa Tersch, Laura Lindeman and Lena Leibner all making the front group when they jumped on their bikes.

With Taylor Spivey (USA), Maya Kingma (NED) and Zsanett Bragmayer (HUN) joining the little group, they all made it through the first couple of laps safely, apart from the small crash that led to Natalie Van Coeverden having to step out of the race. With Duffy, Kingma and Spivey taking turns to try to open a gap with the chase group -that included great runners like Beth Potter (GBR) or Summer Rappaport-, the breakaway only made it til the third lap, when a massive group of 38 athletes regrouped together, making it quite complicated to navigate the technical course with a few chicanes.

By then, the drama in the lead had already started to play out, with Flora Duffy realising that she had left her goggles out of the box, which meant that she had to serve a 10 seconds penalty during the run. The Bermudian started to push hard on the bike up front, but it was literally impossible to get a breakaway, so by the time the athletes finished the 6 bike laps, a massive group made it to the second transition all together. And Duffy knew that she had to go full gas from the beginning.

That is probably easier said than done, as she was the last one of the group leaving transition. But she was a woman on a mission, the mission being managing to open a break long enough to allow her to serve the penalty without having to look back.

The group led by Bragmayer quickly started to stretch, loosing individuals by the minute, and by the time they all made it to the first half of the first loop, Flora was already leading, with Potter following close behind. When they were approaching transition, the reigning Olympic Champion decided to play mind games and suddenly stopped at the penalty box, still with another lap to go. She looked anxiously at the official counting the seconds and saw Potter passing by but she was out of the box right with Lisa Tersch, who by then was running comfortably in third place.

All the pressure was on Potter now, who didnt look back but knew that Duffy was chasing her and even though she tried her best, she was just not able to avoid Duffy passing by her for a second and last time, only 300 meters before crossing the finish line, to claim the 13th WTCS victory of her career, the fourth one in Hamburg, where she raced for the first time back in 2006.

“I couldn’t believe it”, said Duffy after the race, talking about the penalty. “I came into T2 and I saw that my goggles were out of the little box and I thought, oh dear! That really flustered me and I took forever to get my shoes on out of T2 and then Dan, my husband, shouted at me ’10-second penalty’ and I thought, wow Flora, you’re really making it hard for yourself today. I’ve never had a penalty, It’s like now I am making all these mistakes, I’ve got slow transitions, I’m getting penalties. I guess I am trying to make it interesting for myself and make it super hard to win. Dad shouted at me to take it after the first lap, I think to just have a 10-second reset and then to charge it for the last lap but honestly, I thought I was going to come out of that penalty further back in the top ten but I was pretty happy that I was still in second. All I had to do was chase down Beth,” she said.

“I haven’t been pushed like that on the run. I was like this cannot come down to a sprint finish so I just tried to lengthen it but I gave everything out there. Super pumped to take the win after this year, it started off so weird, two times covid, flying to races and my equipment not making it so I am pumped to win, pumped to get myself back in the Series and I am excited for the rest of the year, ” explained the Bermudian, who with this victory is now ranked second on the Maurice Lacroix World Triathlon Championship Series Rankings, Georgia Taylor-Brown still on the lead despite not racing here in Hamburg.

The silver medal for Beth Potter was also a career best for her, after grabbing the first WTCS podium two weeks ago in Montreal, and is now sitting in third place of the rankings. “I was a bit sloppy today in some things, I felt a bit tired coming into this, but it was a nervous two and a half kilometres knowing she (Flora Duffy) was coming. I just tried to keep my cool in the last little bit. Coming into the season, I wanted to consistently be in the top five and in my last races I’ve done that so just need to consolidate on that. I’ve got one last race as part of the season, that’s the goal so need to rest up for that,” she explained.

For much delight of the local crowds, third place was for Tersch, who managed to stay ahead of Spivey and claim her first ever WTCS podium. “I definitely did not expect that. I was just like I am going to go in, going to try hard and give my best and then I am going to be happy when I am done but I didn’t think my best would be good enough for third, so I am really, really happy. I know I can run, it just didn’t show in the past couple of months so it didn’t come out of nowhere but my running form never came through in races. Can’t get any better than that, ” she said.

With Spivey claiming the bitter sweet fourth place, another local hero, Laura Lindemann, closed the top 5 on the day, with Anabel Knoll crossing the finish line right after her to round a great day for the German team, with three athletes in the top six. Maya Kingma, Sian Rainsley, Nina Eim and Emy Legault (CAN) closed the top 10. 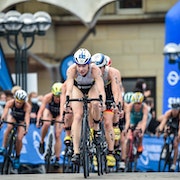 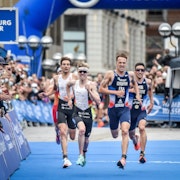