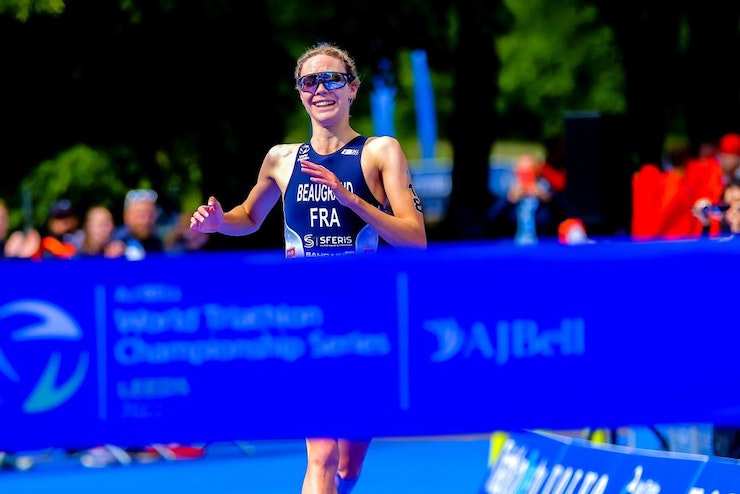 French triathlon star Cassandre Beaugrand made an impactful comeback to the World Triathlon Championship Series podiums to claim the victory this Saturday at the 2022 AJ Bell Leeds, outrunning the powerful British squad on home soil. A month after the disappointment of not finishing the previous race, Beaugrand sprinted to victory despite having to stop during 10 seconds to serve a penalty, with local stars Georgia Taylor-Brown and Sophie Coldwell claiming the other two places on the podium.

Waterloo Lake saw another full start list this Saturday, with 55 women lining up for a 750m wetsuit swim and the water slightly above 17 degrees, and it was a great swimmer, Cassandre Beaugrand, the one who moved first, followed by Flora Duffy (BER), Taylor Spivey (USA) and Vittoria Lopes (BRA).

To many’s surprise, another excellent swimmer, Georgia Taylor-Brown, was a little behind the lead group in the water, as well as Coldwell and Sian Rainsley. But the long run uphill to transition from the swim exit ended up being one of the key moments of the race. Coldwell flew in the 250m on the blue carpet and through the first transition, and a small quartet with Duffy, Spivey, Beaugrand and Coldwell led out on their bikes with a few meters difference.

By the time the group made it to the top of the hill for the first time, they were almost 15 seconds ahead of the chasers, and when they finished the first lap it had increased to half a minute. behind them, Beth Potter (GBR), Taylor-Brown, Lotte Miller (NOR) and Kirsten Kasper (USA) were trying to organise the chase, but with not much luck.

With Coldwell, Spivey and Duffy pushing hard on the uphills and showing impressive bike skills on the downhill, on the second bike lap they dropped Beaugrand, who after a couple of kilometers riding solo waiting for the group and pushed up in front along with Potter. Next one to be dropped would be Duffy, not able to follow Coldwell’s and Spivey’s impressive pace, and also to be catched by the chasers.

By the time the leading duo made it to the second transition, the difference with the chasers was almost 40 seconds, and it looked like the chase pack will be fighting just for the bronze medal, but 5km running on the hills of Roundhay Park can be very long.

Coldwell quickly dropped Spivey while behind her, Beaugrand and Taylor-Brown started the chase, the French woman knowing that she would have to serve a 10 seconds penalty for a mount violation in T1. Not even the loud cheers for Coldwell were enough to get her up to the speed that Beaugrand set, flying in the course passing Spivey first, and then Coldwell, to fly solo in the last 2km, trying to increase the distance with the chasers. The 10 seconds in the penalty box just a few meters before the finish line seemed like an eternity for the Frenchwoman, but she managed to serve the penalty and still leave the box ahead of Taylor-Brown and Coldwell, enough to cross the finish line almost in tears.

“To be fair, I can’t believe it right now. I was just very focussed on my race and after Yokohama (when I crashed) it was quite hard for me because I was in good shape. I wanted it so much, I worked so hard and I just wanted it to pay off, I am very happy with my win today, ” she said. “I crossed my fingers that I had enough gap at the end, I didn’t even want to know how far away they were, ” she explained after serving the penalty and still getting the victory.

Second on the finish line was Georgia Taylor-Brown, enough to maintain her on top of the Maurice Lacroix World Triathlon Championship Series Rankings for another two weeks at least, until the next stop in WTCS Montreal. “I was told at the top end of the run course that she (Beaugrand) had a penalty, one of the coaches said she has a penalty so don’t go with her. I still went with her. I paid for it. I can’t run at Cassandre’s (Beaugrand) speed, I know that for sure but I went out with her on the first lap, I definitely paid for it but I managed to just hold on,” said the Brit, who was extremely happy to see the crowds back cheering at the park. “It’s incredible. All you hear is your name being shouted at literally every part of the course, it was just amazing. Everyone really gets behind you here and it just feels really special, it gives me goosebumps to be out there racing”.

Coldwell was also all smiles when she crossed the finish line in the third place, the same place she got in Leeds last year. “I knew the girls were classy runners and I am probably not firing all cylinders in running yet so I tried to put as much in them on the bike and probably paid for it for a bit on the run but you just have to play with your cards sometimes and that’s what I did.”

A downhill sprint gave American Taylor Spivey the fourth place just inches ahead of another British, Beth Potter, who had one of the fastest run splits of the day, only behind the astonishing 16.10 -including the 10secs stop- of Beaugrand. Laura Lindemann finished in the 6th place, followed by Duffy, Anabel Knoll (GER) and Julie Derron (SUI) closing the top ten.