An all-round strong performance across the three disciplines carried Australia’s Aaron Royle to his first ITU World Championship, and broke a 10-year drought for Australian men in the Under23 category in Auckland on Saturday.

Royle was in the lead group across the swim, bike and run and out-sprinted Spain’s Fernando Alarza and Great Britain’s Thomas Bishop in a frenetic finishing chute finale to win in 1 hour 57 minutes and 17 seconds, just three seconds ahead of Alarza.

“I had to stay relaxed during that run. I just wanted to watch from the back and see how everyone is looking, my plan was to wait until that very last minute and try and hold on for the sprint,” Royle said. “It’s sometimes hard to do that because you can get a little bit anxious but I just stayed patient and it worked out for me today.”

In a race where the contenders were decided early, Royle was one of the leaders out of the water beside teammates Ryan Fisher and Joshua Amberger, and South Africa’s Henri Schoeman and Russia’s Igor Polyanskiy.

But with the first 31 men out of the water within 20 seconds of the leaders, a large lead group of just over 20 athletes started to form on the first lap of the bike. However Amberger, Bishop and New Zealand’s Tom Davison made sure they didn’t hang around long, setting a blistering pace at the front on the hilly bike course. Within two laps, the lead group had dwindled to nine athletes, including the three Australians, Davison, Bishop, Polyanskiy, Alarza and Frenchmen Pierre Le Corre and Anthony Pujades.

Apart from Jason Wilson (BAR) bridging up solo at the halfway mark, that’s how the lead group stayed for the 40km bike as they continued to increase their lead on the chase group.

While those ten entered T2 together, they started to peel away soon after as Fisher set the pace up front. While Le Corre tried to make a move in the third lap of the run, he was reeled back in by Bishop. On the final run lap Fisher dropped, leaving a four-man race for the title between Le Corre, Royle, Bishop and Alarza.

But with a few hundred metres to go, it was clear it was Royle’s race as he played out his plan to perfection and powered away from Alarza. Bishop finished just one second behind the Spaniard to claim his second consecutive ITU Under23 World Championship bronze medal. He said he deliberately hammered the bike to try and fend off his competition, but it didn’t quite work.

“The bike course is awesome, I wish more races were like that,” Bishop said. “I tried my hardest to hurt the legs of the guys and take the kick out of them but I didn’t quite do it and I got third again, but I tried my hardest and I’m content with that, getting a medal at a world championships is pretty good.”

The 2011 Under23 World Champion Matthew Sharp had a tough race after missing out on the lead bike group, but did post the equal fastest run split of the day of 31:04 to run through the field and finish sixth, while the USA’s Gregory Billington and Australia’s Ryan Bailie also made up significant time in the run to put themselves into the top ten. 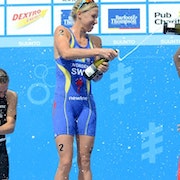 Germany's Anne Haug put the finishing touches on a breakthrough season with a victory in Auckland today, claiming the Grand… 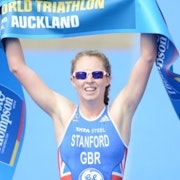 Great Britain's Non Stanford put in her most impressive performance when it counted, to claim the 2012 ITU Under23 World…

The Parade of Nations and Opening Ceremony officially launched the biggest ITU World Championships in history with over 3,000… 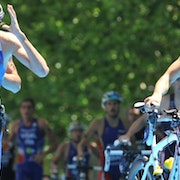 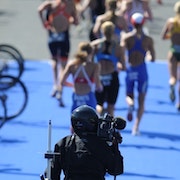 Itching to watch the men's and women's elite races, but can't make it to Auckland? Not to worry. ITU has you covered from… 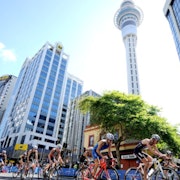 The 2012 ITU World Triathlon Series comes to a close with the crowning of the world champions at the Grand Final in Auckland,…