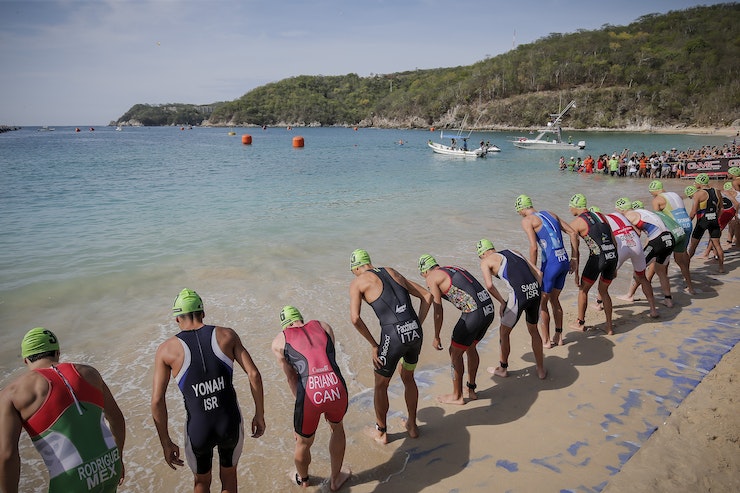 It’s time for the World Cup tour to arrive in Mexico for the 2019 Huatulco ITU Triathlon World Cup.

Huatulco, a town in the southern Mexican state of Oaxaca, has a long-standing history with the ITU World Cup series, since making its World Cup debut in 2008.

Elite athletes will take to the World Cup stage on Sunday, June 9, in Mexico, adding another opportunity for competitive racing, in a crucial Olympic qualification year. The elite athletes will test their best in the hot and humid conditions, over a sprint-distance course which will feature a 750-metre swim, 20-kilometre bike and 5-kilometre run course. The course is expected to be lined with Mexican support for the sport and home heroes of triathlon.

The ASICS World Triathlon Team will also compete in Huatulco, giving more chances for these athletes to compete at a World Cup level and gain Olympic qualifying points towards their Tokyo 2020 aspirations.

Elite women’s race preview
The elite women will line up on Sunday at 8.00am local time and it’s USA’s Summer Rappaport who will be sporting number 1 and lead the women into Huatulco. Rappaport leads into the race with confidence, after a remarkable performance in the recent World triathlon Series race in Yokohama where she was awarded the silver medal.

“Although I’ve raced in Mexico many times I my career, this will be my first time in Huatulco. I’m looking forward to racing in a new place and in testing conditions, similar to what we expect in Toyko for the test event in August,” said Rappaport.

Fellow USA team member Kirsten Kasper returns to racing after an extended period of time off due to injury. As it’s Kasper’s first race back in 2019, the talented American triathlete, who is thrilled to be back lining up and racing the best, will be looking to make an impact on the field from the start.

Austria’s Lisa Perterer will be among the women to watch and has been known to have success in Mexico with fourth place in 2018. Since 2012, she has stepped on the podium in five World Cup races hosted in Mexico, including Huatulco in 2013.

The elite women’s field is stacked with experience and possible podium contenders including Australia’s Charlotte McShane and Mexico’s own Claudia Rivas, Adriana Barraza and Michelle Flipo, who will have their focus on earning a medal in front of a home crowd.

Elite men’s race preview
Canada’s Tyler Mislawchuk headlines the men’s race in Huatulco which commences at 10.00am local time. The professional triathlete has had a strong start to the season, with a win in the Mooloolaba World Cup and a strong race in the Yokohama World Triathlon Series event. Mislawchuk has been doing some targeted heat training, in preparation for the Mexican conditions come race day. Mislawchuk has been in Huatulco all week, with his training group, getting set for the next stop on the World Cup tour.

“I’ve been in Mexico for a few days now. It’s an awesome place for the race and I’m looking forward to getting out there. I chose to race here to prepare for other hot races like the test event in Tokyo later this year, said Mislawchuk.

Defending champion and Mexico’s own Rodrigo Gonzalez lines up as a firm race favourite. Gonzalez had the best season of his career in 2018 and has produced a solid start to 2019 with a gold medal performance in the CAMTRI Triathlon American Cup.

“I’m really looking forward to racing Huatulco World Cup again. Last year was so special and to win in front of friends, family and a home crowd is something I’ll never forget. The course leaves no room for error and I am looking forward to getting out there and racing it,” said Gonzalez.

Mexican counterpart Crisanto Grajales will be motivated to strike in front of a home crowd. Japan’s Jumpei Furuya, Canada’s Matthew Sharpe, Mexico’s Irving Perez and USA’s Morgan Pearson will battle it out on Sunday, for a spot on the podium in Mexico.

Alexis Lepage, from Canada, produced an outstanding race in the 2019 Chengdu World Cup, which saw him earn his first podium finish. Lepage is among the men to watch come Sunday.

Kevin McDowell, from team USA, will be another strong contender heading into Sunday’s race. McDowell claimed the bronze in the recent World Cup in Calgiari, Italy, and stood on the podium with the likes ofAlistair Brownlee.