The ITU World Cup season continues with its annual pilgrimage to Hungary this weekend for the iconic Tiszaujvaros World Cup. Last year saw the introduction of an exciting sprint semi final and final structure and this unique race format has been maintained for the 2013 event.

The total number of race entries will decide the number of semi finals and this year sees two women’s semi-finals and four men’s. A fixed number of athletes from each semi final will qualify for the final and there will be additional places for the fastest times. Aileen Reid (IRL) will wear the number one race jersey in the opening semi final. The Irish star has produced a string of steady performances in the 2013 World Triathlon Series, finishing between 8th and 17th in six races.

Reid will battle with Ai Ueda (JPN), who comes into this event in fine form after winning the 2013 World Games title in Cali a few weeks ago. Yuliya Yelistratova (UKR) is another athlete in fine form, winning the ITU Sprint European Cup in Tartu last month and following that up with second place in Istanbul last week.

Australia’s athletes enjoyed a lot of success in this format last year and Natalie Van Coevorden and Tamsyn Moana-Veale will be confident of progression to the final, as will Great Britain’s Katie Hewison.

Semi Final 2
Annamaria Mazzetti (ITA) leads the charge in the second semi final. The Italian has performed brilliantly in previous races in Tiszaujvaros, finishing third last year in the new format and coming second in 2011.

Charlotte McShane (AUS) comfortably made last year’s final, finishing second in her semi final before just missing out on a podium in the final. Felicity Sheedy-Ryan (AUS) is another athlete in good form following her victory in Geneva last month and Eszter Dudas (HUN) will be keen to do well on home soil.

A number of the younger athletes such as Kaidi Kivioja (EST), Monika Orazem (SLO) and Sofie Hooghe (BEL) are racing at the elite level and it will be interesting to see how they perform with this race format.

The top 14 athletes in each semi final will qualify for the final with another two places awarded to the next two best times. 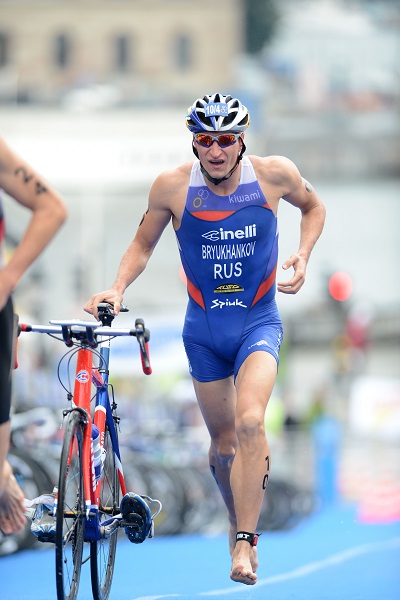 A mouth-watering field will line up in the men’s first semi final with Under23 European Champion Florin Salvisberg (SUI) taking on the power of Alexander Bryukhankov (RUS). Great Britain’s Mark Buckingham won in Palamos last month and Brice Daubord (FRA) was third in the World Cross Triathlon Championships in The Hague.

Semi Final 2
Peter Kerr leads the men’s second heat. The Aussie started his season off with a bang finishing third at the Mooloolaba World Cup. Aaron Harris (GBR) and Akos Vanek (HUN), who were second and third respectively here in the 2011 World Cup, meet again in Heat 2. They will come up against Yegor Martynenko (UKR), who, on his day, is more than capable of going all the way.

Oscar Vicente (ESP) will be another one to watch in this heat. He displayed his sprint qualities by winning the ITU European Sprint Cup in Cremona earlier this year.

Semi Final 3
The third heat is wide open and a number of athletes will fancy their chances at going all the way to the final. Irish duo Bryan Keane and Conor Murphy have sprint pedigree and have posted good results in 2013. Declan Wilson (AUS) has won his previous two races in Holten and Mooloolaba and will look to deliver on a World stage.

The talented Aliaksandr Vasilevich (BLR) will be one to watch in this heat, as will Ivan Ivanov (UKR) who had a break through performance at the Edmonton World Cup as a part of Team ITU.

Semi Final 4
In the fourth semi-final, Bryce McMaster (NZL) and Anthony Pujades (FRA) displayed their speed last year as they successfully negotiated to the semi finals. McMaster won his semi final only to finish 13th in the final, while Pujades qualified for the final in second place in his heat before winning the bronze medal.

Gregory Rouault (FRA) has two World Cup wins under his belt already in 2013 and will look to claim his hat-trick in this race format. Sebastian Rank (GER) was part of the victorious German relay team at the European Championships in Alanya and a similar intensity of racing will be required here.

The top seven elite men in each semi final will qualify for the final with another two places being awarded to the next two fastest times.

Team ITU
Team ITU will also be in action this weekend, with Militzia Riós La Luz (PUR), Melissa Riós La Luz (PUR), Tea Milos (CRO) and Monika Orazem (SLO) competing in the women’s race, while Ron Darmon (ISR), Felipe Barraza (CHI) and Emil Stoynev (BUL) will lineup in the men’s event. The athletes will be coached by Luc Morin of Canada, as well as Hungary’s own
Dr. Zsolt Szakály.

The 2013 Tiszaujavros ITU World Cup gets underway when the first elite women’s semi-final starts at 1:30pm (local time) on Saturday 10 August. Semi-finals will start in waves every 20 minutes, followed by the first men’s heat at 4.10pm. The finals will follow on Sunday 15 July with the women’s at 3:45pm followed by the men’s final at 5.00pm.