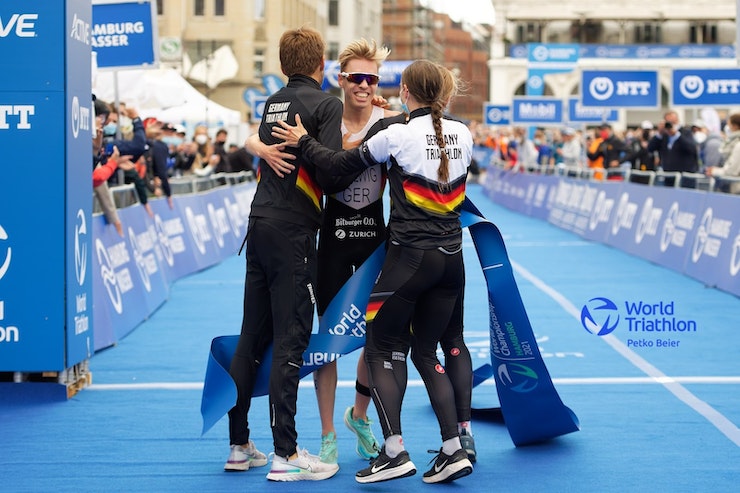 As if Mixed Relay races were not exciting enough, add to the mix a penalty to be served just a few meters before crossing the finish line by the leading athlete and you have what happened this Sunday at the 2021 Hamburg Wasser World Triathlon Mixed Relay Hamburg, where the German team put the perfect ending to the weekend by crossing the finish line in first place in a dramatic way. Italy ran away with the silver medal, while the young team from Denmark earned the first-ever relay medal finishing in third place.

15 women were in charge of starting the race in the iconic pontoon on the Hamburg city center, with Erika Ackerlund (USA) wearing the number 1 that gave her the chance of choosing her spot on the start first. And while she choose the far right corner, great swimmers like Olivia Mathias (GBR), Laura Lindemann (GER), Natalie Van Coevorden (AUS), Alberte Kjaer Pedersen (DEN) and Nicole Van Der Kaay (NZL) all went to the opposite side, with Mathias leading the small group of six that opened a small gap in the first leg of the 300m swim.

Even though they managed to get out of the water with a small gap, it was not enough to prevent most of the chasers to catch them as soon as they were on their bikes, and soon a group of 12 athletes was riding together until they all entered transition for the fast run. It was then the moment for Kjaer Pedersen, current U23 silver medallist at the World Championships, to prove that she is one of the fastest athletes of the moment, with only Lindemann able to follow her. They both tagged their teammates on the lead, with Team Italy right on their feet.

And it was Team Italy, with Alessio Crociani, who decided to go up front on the bike followed by Emil Holm (DEN), Lasse Nygard-Priester (GER), Saxon Morgan (NZL), Daniel Dixon (GBR) and Chase Mcqueen (USA). They managed to leave behind them Team Australia, Team Netherlands and Team Canada, while Team Spain was almost one minute back, but when it came to the second run segment of the day, it would be Spaniard Antonio Serrat Seoane the one storming the field to breach the gap and almost make contact with the leading group. Meanwhile, Emil Holm pushed hard enough to tag his teammate in the lead with almost 10 seconds of a difference.

With Holm handing over to Six Bendix Madsen for Team Denmark, it was clear that it won’t be easy to leave the young Danish team behind, and the 2018 Buenos Aires Youth Games silver medallist was able to stay up front, followed by Ainsley Thorpe, Marlene Gomez-Islinger and Carlotta Missaglia (ITA) throughout the whole leg, leaving even further behind two of their main rivals for the day: Summer Rappaport from Team USA and Sian Rainsley for Great Britain.

By the time of the anchor leg, the leading group was only of four teams: Italy, Germany, New Zealand and Denmark, and Tim Hellwig and Gianluca Pozzatti decided to go full gas from the beginning of the last leg. By the time they mounted their bikes it was just the two of them, but the drama will begin just at that moment. Hellwig took the bike before fastening the helmet, which means a 10 seconds penalty to be served right before crossing the finish line. He knew it, and he decided to try to save some legs on the bike to give it all on the run, knowing that a sprint finish like the one that gave him gold the day before wouldn’t work this time.

The young German went full gas from the moment he left the second transition, and managed to open a gap of 10 seconds in the first lap of the two needed. Would that be enough? Hellwig stopped at the penalty box holding his breath, desperately looking back, hoping to not see Pozzatti turning around the last corner for the likely ten longest seconds of his life. It ended up being enough. And Hellwig grabbed the famous Hamburg tape to be hugged by his teammates, with a delighted Team Italy finishing in second. Oscar Gladney Rundqvist had the run of his life to earn Denmark their first-ever medal in Hamburg on the Mixed Relay, with the Kiwi team finishing in fourth place, and Team USA in the fifth place.

“It was just a perfect race from the whole team, everyone did a great job and it was a perfect weekend,” said Laura Lindemann. It was indeed a glorious weekend for Germany, claiming the three gold medals of the 2021 Hamburg Wasser World Triathlon Championship Series Hamburg. “The team spirit was very good and that was key,” explained Lasse Nygaard-Priester. The hero of the day Hellwig, couldn’t be happier: “I knew straight away that this will be a penalty, so I tried to be a bit conservative on the bike and had to go out in from the beginning of the run and I am just happy it worked out.”

Also happy and proud was Team Italy, especially the anchor man, Pozzatti. “I heard they (Germany) got a penalty so he was really strong on the run, I tried my best to hold on, I knew 10-seconds can be a long time and tried to stay as close as I could but just went too hard in the end. I am super proud of this young team and super happy to share the podium with them”, he said. “It’s a very good race from everyone. We are younger but we have a whole day of power and we did our best,” said Beatrice Mallozzi. It was indeed a great debut for most of the team members. “I am very happy about this. It’s my debut in the major league of triathlon, WTCS Mixed Relay, so I am very happy about this.  I know I am strong in the swim and the bike so I pushed hard in the first swim, so I am very happy about this. On the run I tried to stay with the German team so I could do changing of the position for my teammate Carlotta”, explained Crociani.

Alberte Kjaer Pedersen said: “It was so exciting and it was really crazy and I loved every second of it. Everyone did their best and then it just happened, we became third in Hamburg. It’s just crazy.” Her teammate Oscar Gladney Rundqvist explained: “It was absolutely crazy, I really didn’t expect for this to come. It was such a hard day yesterday for me and just to see the team performance they did, it gave me so much adrenaline. This is awesome and one of the best performances by this team and so much motivation for the future”.