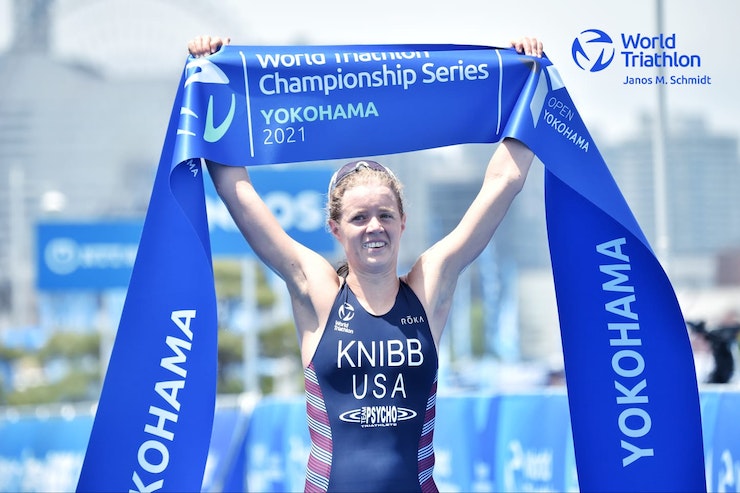 The 2021 World Triathlon Championship Series got up and running on Saturday with WTCS Yokohama, and it was a dream return to the blue carpet for USA’s Taylor Knibb as she delivered a timeless performance to win gold and guarantee herself a place on the Olympic start line.

It was a devastating bike with Maya Kingma (NED) that dictated the race, the pair putting in a huge margin on the rest of the field, USA’s Summer Rappaport eventually catching the rising Netherlands star to take silver, Kingma again showing her great form with a first WTCS medal.

“I wasn’t really thinking about Tokyo I just wanted to get to that finish line,” admitted Knibb. “Maya was so good on the technical sections of the bike so I just wanted to pay attention to that and push on the sections where the group was slower. I was just like ‘I gotta run’, knew I just needed second and there wasn’t a lot of time for thinking!”

—
Race number one Katie Zaferes and teammate Taylor Spivey lined up side-by-side on the pontoon knowing that a podium finish would guarantee their place alongside Rappaport on the plane to Tokyo. Two distinct groups of swimmers then closed in on the first buoy at the 250m mark, Helena Carvalho (POR) leading the way around it enjoying clear water.

Rappaport was soon right alongside the Portuguese and then out front on her own at the halfway point, and by the final turn Zaferes was 30 seconds back with Joanna Brown (CAN) and Lotte Miller (NOR).

Kingma had a smooth transition to mount her bike first and laid down the challenge to the pack of ten behind that included Amelie Kretz (CAN), Kirsten Kasper (USA), Yuko Takahashi (JPN) and Sophie Coldwell (GBR).

With the leader quickly caught and fifteen athletes in a train including Cassandre Beaugrand (FRA) and Mexico’s Lizeth Rueda Santos hanging on at the back, while 20 seconds behind were Vendula Frintova (CZE), Edda Hannesdottir (ISL) and Laura Lindemann (GER).

Powered by the likes of Non Stanford (GBR), Emilie Morier (FRA) and Barbara Riveros (CHI) the chase pack were closing in, while Zaferes was over a minute back and hoping the groups would merge and slow.

That was the trigger for Kingma and Knibb to make their move, Lotte Miller the only one able to try and give chase but she too soon realised that the young pair was just too powerful, building a useful 10 second margin within the first few kilometres of their breakaway.

The pair was clearly relishing their time up front, hoovering up the long corners and being able to inject the kind of pace that the larger chase pack just couldn’t match. Kingma’s skill on the technical sections and Knibb’s raw power on the straights was proving the perfect combination at the halfway point with a 30 second lead opened up.

With three laps to go that gap was up to a huge 75 seconds, the sweep around transition showing the two out front exactly how well their work was paying off and hurting the likes of Spivey who only saw the margin grow with each pass. Incredibly, at the bell it was up to nearly two minutes, Zaferes, Sif Bendix Madsen (DEN) and Claudia Rivas (MEX) a further 30 seconds back.

Kingma led Knibb out of T2 and onto the run well before the chasers had hit the blue carpet and with a crucial 10km ahead of them. Natalie Van Coevorden (AUS) and Claire Michel (BEL) were leading the swarm out of T2, Zaferes now right among them.

Kirsten Kasper (USA) and Valerie Barthelemy (BEL) were among the strong runners looking to make some headway, but it was Rappaport, the only American with her Olympic place assured, who found herself moving into third by the end of the third lap and putting daylight between her and the Stanford- led pack.

At the 5km mark Knibb had put 35 seconds over Kingma who was still moving well despite dropping off, Rappaport closed to within a minute of the young Dutch and Spivey, Emilie Morier and Miriam Casillas Garcia (ESP) among the names another 15 seconds off her.

Knibb afforded herself a smile as she checked there was one lap to go, safe in the knowledge there was now a minute to Kingma in second.

Rappaport at that stage was 15 seconds back but was closing in fast and caught the flying Dutchwoman, passing her early in that last lap. Kingma was able to stay strong in third and a brilliant first podium, Rappaort silver in one of her favourite races but Knibb laying down a huge statement of intent to land the gold by 30 seconds and a place on the plane to Tokyo.

“This is a favourite place to race and I’m so happy to be back here and part of an American one-two,” said Rappaport. “I’m the kind of athlete who likes to be in their room doing nothing in race week so the build-up has been fine and I was just really happy and grateful to race. I was focussed on catching Taylor and Maya after only racing twice since the pandemic and today I felt I’d found my competitive edge again.”

“I was prepared to give it everything on the swim and first lap of the bike and hope there was a small group,” said Kingma. “Taylor escaped before I was planning to and she was so strong on the straights, and we pulled away. I was just trying to keep her wheel and I saw the gap growing. Two years ago I was suffering on the bike and today everything felt like it was going well until the final lap and I just wanted to hang on to Summer.” 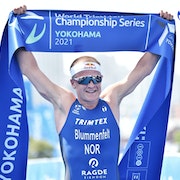 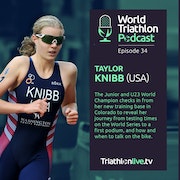