Great Britain got off to a stellar start in Beijing and that was showcased in a spectacular gold-silver-bronze sweep in today’s men’s ITU Triathlon Under23 World Championships.

Matthew Sharp claimed his first world title with an impressive performance on a hot and windy day in Beijing.  His British teammates David McNamee and Tom Bishop battled for silver in a sprint down the final finish chute that McNamee won at the line.

“This year everything’s gone right for me and it’s paid off with a gold medal so I’m chuffed,” said Sharp at the finish area.

A sizeable field of 67 men dove into the warm waters of the Shisanling reservoir in Changping, Beijing for a one-lap 1.5km swim.  The field was led out of the water by a pair of Russians Igor Polyanskiy and Denis Vasiliev.  They were followed closely by France’s Pierre Le Corre, Bishop and Andrey Bryukhankov.

Onto the tough 40km bike course, a lead group of more than 32 men materialized out of T1.  But early on, a group of three that included Tom Davison (NZL), Benjamin Shaw (IRL) and Michael Poole broke away from the main pack.  The trio worked together and built a lead and continued to extend it with every lap.  Back in the main chase group of about 27 men, Vasiliev was trying to get the group organized to cut the gap but they only lost time.

Going into T2, Shaw, Davison and Poole hit the 10km run course clutching a 70-second lead.  Shaw took the lead early in the run but it was short-lived as all three were reeled in by the second lap as the class runners took over and asserted their contention for the world championship.

As the challenging run course, that features two hills, grinded down the athletes, a lead group of five men emerged.  In that group were Greg Billington (USA), Bishop, McNamee, Sharp and Le Corre.  When the Frenchman Le Corre was dropped, the possibility of a British sweep became within reach.  The four ran together as they hit the bell lap.  But once they ran back into the stadium area, Sharp had run clear of his teammates and Billington and cruised to the finish line to secure his first ITU World Championship.

“This is probably the best I’ve ever felt in my life. I felt good for every step of the run and I was just waiting for the time to pounce and I thought with half a kilometre to go, I just kicked as hard as I could and didn’t look back,” said Sharp. “I felt really strong on the run and I was just thinking ‘bide your time, bide your time, don’t go too early’ because it was pretty hot and I think it was a tough course. I heard someone shout from the crowd that it was just us three Brits at the front. On the uphill Bishop attacked a little bit, but when we got to the top I just went and sprinted as hard as I could.”

Behind Sharp, the American soon dropped off the pace, leaving Bishop and McNamee in a duel for silver.

“Me and Tom actually share a house together. I know he’s a very good sprinter and I know nine times out of ten he would out-sprint me, but I think I got to the line that little bit fresher and when I came past him I just shut my eyes and went for it,” said McNamee.  “I got dropped a few times on the run. Every time there was a surge I was struggling to keep up with the pace. I just managed to fight myself back on and when I got there I just wanted to make sure I crossed the line having given everything.”

Billington finished just off the podium in fourth while Franz Loeschke, last year’s bronze medallist in the Under23 world championships, rounded out the top five.

The Under23 women will be contested at 15:15 on Saturday after the elite men’s race. Click here for the start list 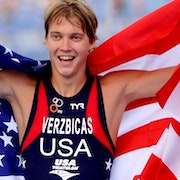 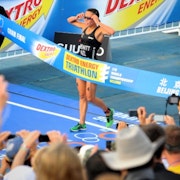 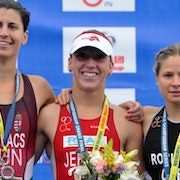 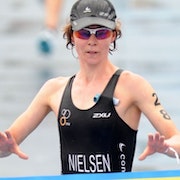 On cold, rainy day in Beijing, Mikayla Nielsen of New Zealand shone through, securing the biggest win of her promising career…