Spain’s Mario Mola was billed as the “benchmark” in the men’s race at Mooloolaba on Saturday, and the No.1 ranked athlete on the start list didn’t disappoint with his second major win in a week.

In hot, humid conditions on Australia’s Sunshine Coast, Mola was pushed by his compatriot Vicente Hernandez until the final lap. But just like in Abu Dhabi last week, Mola proved too strong and crossed the line in 52 minutes and 54 seconds.

And it came after a close call, after he just avoided a spill early on in the bike leg.

“I tried to be in the best position possible for the whole bike, I knew we were going to be a big pack… I think at that point I like fourth or fifth, but the guy just in front of me crashed and I just couldn’t stop, I just tried to stay on my bike,” Mola said.

“But luckily when these things happen and you are in the front, you can still draft from the guys behind…if I had been further back in the pack I would have struggled to get back into the race.”

“It’s a great atmosphere, it’s my favourite race here and my second win. In 2014 I was able to get it too, so I think I’ll be back again.”

After a 31-second silence at the start of hte race to honour the late Laurent Vidal, Mola said it the race win had extra meaning.

““It was a really special one, I like to honour Laurent Vidal, we had 31 seconds of silence before the start and this win is for him,” Mola said.

The day started with slightly less swell than met the women at Mooloolaba, and Australia’s Marcel Walkington used his superior surf skills to catch a wave right up to the beach. Behind him was Canada’s Alexis Lepage, and then one long line of competitors who streamed into transition one after the other.

After the first lap of the bike the majority of the field was locked together in one group, until Lepage’s spill, which caused him to withdraw from the race. While it did split the field a little, the group was still around 50 athletes heading into the second transition.

Greece’s James Chronis sped out of transition, but Mola, Hernandez, Joao Pereira and Ron Darmon quickly pushed to the front at the end of lap one. That group stayed together for the next lap, before Mola and Hernandez stepped up their pace in the final of three laps.

While Mola went on to claim his second win in 2016, and his third in a row counting the Grand Final in Chicago last year. Hernandez claimed silver, his second consecutive podium at the Mooloolaba event, after third in 2015.

Behind him Portugal’s Joao Pereira rectified a disappointing 35th place in Abu Dhabi in third.

Jodie Stimpson’s perfect start to the season kept on rolling in Mooloolaba, as the British star pulled off a confident win…

Mooloolaba will again play host to the opening event of the 2016 ITU World Cup season this weekend, as in-form athletes hit… 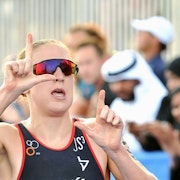 Claiming her first WTS victory since 2014, Jodie Stimpson finally earned her way back to the top of the podium by winning the… 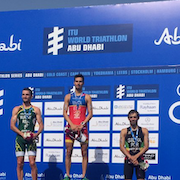 Spain's Mario Mola started off the new World Triathlon Series season exactly where he finished, on top of the podium, as he…