Jonathan Brownlee‘s season might only be two races in, but the reigning ITU World Champion showed his title defence was back on track with another stunning performance in Madrid on Sunday.

After making a brilliant return from an ankle injury in Yokohama last month, Brownlee was again in the lead from almost start to finish to win his second consecutive race in the 2013 ITU World Triathlon Series season. It was also his second consecutive win in Madrid as well as keeps the race title in the Brownlee family. Since the series started in 2009 only Jonathan and brother Alistair Brownlee have topped the podium in the Casa de Campo park.

On Sunday, Brownlee was in the lead group out of the water before driving the pace in a five-man breakaway for the 40km bike leg. They left T2 with over a minute and a half on the rest of the field and within the first few hundred metres Brownlee strode to the front and made it clear he was the one to beat. He had put 16 seconds on Spain’s Javier Gomez on the first lap alone, before going on to claim his sixth ITU World Triathlon Series win by 50 seconds in a time of 1 hour 50 minutes and 42 seconds.

“It’s a good triathlon course this one, as I keep saying it’s a pure triathlon course,” Brownlee said. “Our group was incredible there, all the other riders did turns throughout the race and it was a fair race I think, so I enjoyed it but it was tough, it’s always tough.”

The day started under blue skies and there were no surprises at Casa de Campo on the non-wetsuit swim. The always strong Ivan Vasiliev (RUS), who finished just outside of the podium in Madrid last year on his way to securing an Olympic spot, was determined to put himself in a top position before heading for the tough bike course. He did just that, followed by his teammate Igor Polyanskiy, younger brother Denis Vasiliev (RUS), Richard Varga (SVK), Gomez (ESP) and Brownlee (GBR).

Brownlee’s pre-race plan to push the swim pace and break away with a small group on the bike played out perfectly. Together, with Italy’s Alessandro Fabian and 2012 Under23 World Champion Aaron Royle (AUS), the group quickly hammered up the first hill for a sizeable advantage. The speed proved too much for Varga and Denis Vasiliev dropping back early in the bike, while top five forged ahead.

The high sun and challenging hill did nothing to slow the fast five, with the group increasing their lead on each lap. Behind them two chase groups became one on the fifth lap and with more than 30 athletes together the paced slowed significantly from that time. With two laps to go, they enjoyed one minute and 27 second lead on the massive chase group.

After destroying the final few bike laps for a near two minutes advantage, Jonathan headed out of transition first, followed tightly by Gomez. As he is known to do, Jonathan blistered through to the first turn to move ahead of Gomez by nine seconds. That gap increased each lap as Jonathan pulled away to the win.

However an interesting battle behind Brownlee and Gomez was also playing out, for the final podium place. After lap one, Vasiliev had a slight five second gap over Royle and Fabian and ran strongly to hold on to that and to claim his first career series podium. Spain’s Mario Mola did put in the run of the day though, a stunning 30 minutes and 12 seconds, to almost catch him in the final kilometre, as he overtook Royle and Fabian to finish fourth. Fabian claimed fifth - the second consecutive year he’s claimed fifth in Madrid, while Richard Murray put in another killer run leg to finish sixth.

Javier Gomez’s performance was enough for him to take the overall series lead, with four races now completed in the 2013 season. 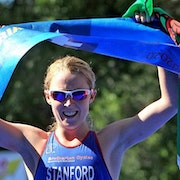 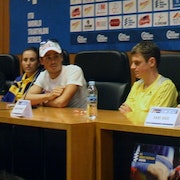 Ahead of the World Triathlon Madrid, athletes took time out on Thursday to speak with media on their seasons to date, race… 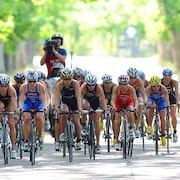