In the women’s ITU Triathlon Junior World Championship race at the 2016 World Triathlon Grand Final Cozumel on Friday, Taylor Knibb (USA) nabbed her first world championship title with a dominating bike and run performance. Lisa Tertsch (GER) produced a speedy run for second and in a sprint finish, Hye Rim Jeong (KOR) out ran Ines Santiago (ESP) for bronze. The bronze is the first-ever World Championship medal of any level for Korea.

“That was probably the worst swim of my entire life, I just had to be patient and move my way up,” Knibb said. “If someone had told me that was how the race would have panned out, I would have just laughed. I live in DC, so it’s been a very humid summer, so I’m kinda used to going out and feeling like you hit a wall of heat.”

Japan’s Fuka Sega and Minami Kubono, along with Hungary’s Dorka Putnoczki, managed to maneuver their way through the swim first for a 10-second lead. While several pockets of women formed out of the swim, 32 women came together after the first of four bike laps, including pre-race favourites Cassandre Beaugrand (FRA) and Taylor Knibb (USA).

Lena Meißner (GER), Therese Feuersinger (AUT) and Knibb knocked out a 20-second lead over the field midway through the bike. On the third lap, Knibb stretched out her top place over the main chase to 35 seconds, while her break away partners Feuersigner and Miesner dropped to 17 seconds back.

While the pair continued to fall back to the chase as the bike ended, Knibb ran out nearly half a minute before the rest of the women arrived to T2. Nimble on her feet as she is in saddle, Knibb hung onto her lead after the first of two run laps, while Lisa Tertsch (GER), Hye Rim Jeong (KOR), Cecilia Santamaria Surroca (ESP) and Ines Santiago (ESP) positioned themselves next in the run.

But there was no stopping or slowing Knibb as she cruised over the finish line to win the Junior World Title, meaning the US won both the men’s and women’s titles in the category.

Behind her, Tertsch went unchallenged in the final lap for silver, while Santiago and Jeong engaged in a sprint battle down the finish chute. In a last burst of speed, Jeong passed Santiago for the final medal. 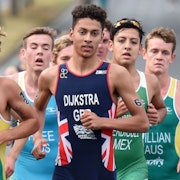 The junior men’s and women’s World Championship races will be contested on Friday, September 16 and 3pm and 5pm,…