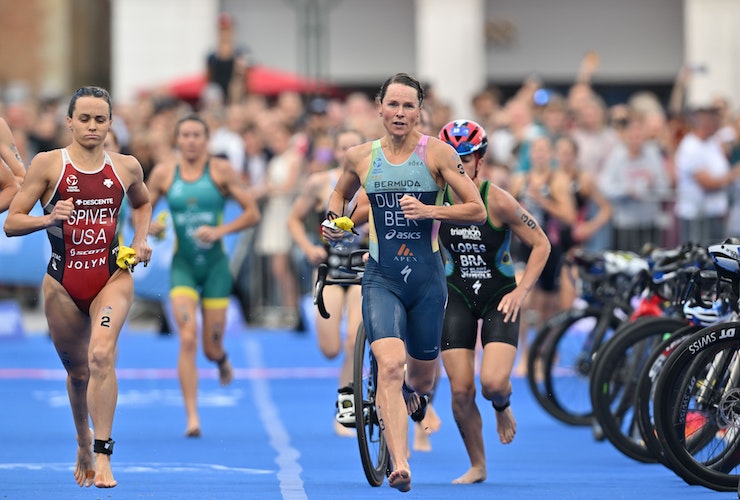 The penultimate stop on the 2022 World Triathlon Championship Series tour lands in Bermuda this weekend, with the island’s greatest sporting legend Flora Duffy looking to use Sunday’s race to take another step towards a record fourth world title. Currently trailing only GB’s Georgia Taylor-Brown in the Maurice Lacroix Rankings, victory this weekend would put Duffy onto three golds and a bronze this season, just behind the Brit’s three golds and a silver in what has been an incredible duel over the past 12 months, and leaving the Championship Finals in Abu Dhabi a straight shoot-out for the title.

This will be only the third edition of Series action on the island, the first since 2019 and the first time that the Bermudians will get to see their one and only Olympic Champion in action since her incredible Tokyo 2020 title-winning performance. The locals are ready to bring the carnival to WTCS once more, lining every possible stretch of this tough Olympic-distance course.

It all begins with a two-lap swim, the first of 700m, the second 800m as the athletes veer to the left after the final buoy and head towards transition. Out of the water it’s a short run up into T1 and out onto the 40km bike, the course undulating before becoming truly steep up the tight and winding Flora Duffy Hill.

Eight gruelling laps on two wheels then transition into a flat, 10km run, the fourth lap taking the athletes to the tape. It’s a mighty challenge for the athletes to conquer, and you can watch it all play out on TriathlonLive.tv from 2pm local time.
—

Duffy ready to channel spirit of her 2018 show

It was here that Flora Duffy won the inaugural 2018 edition in style, crossing the line almost two minutes ahead of nearest challenger Vicky Holland and sending the crowds wild. Injury would then derail not only her 2018 season but much of 2019, forcing her out of the second edition but the rest, as we know, is history. Duffy has since underlined her credentials as the best the sport has ever seen and knows that victory here and again in Abu Dhabi at the end of the month will see her World Champion for an unprecedented fourth time.

She returns home after missing out on WTCS Cagliari to focus on preparations for last weekend’s 70.3 World Championships in St George. Only time will tell if that fifth-placed finish on a cold day in Utah will have provided the preparation she would have wanted for the Bermuda challenge as she hunts a first WTCS gold since July in Hamburg.

But this isn’t just the Flora Duffy show and the women’s field is deep with talent looking to put their own markers down as the season nears its apex. With no Georgia Taylor-Brown or Cassandre Beaugrand in action, Beth Potter will hope she can maintain the consistency that has already landed her first Series podiums – in Montreal and Hamburg – and catapulted her into contention for an overall Series medal.

The Brit hadn’t even made her Series debut the last time Bermuda was contested, while another rival for the Series medals, USA’s Taylor Spivey, has two top-ten finishes here and knows the course as well as anyone. Always efficient, fearless and rarely off the front, Spivey has narrowly missed out on the medals by finishing 4th three times in 2022. A podium here would be exactly the momentum she needs heading to the Finals.

Another challenger and a podium regular who finally found the golden touch this season is Germany’s Laura Lindemann, while Sophie Coldwell makes her Bermuda debut as she looks to improve on two third-place finishes so far in 2021 and realistically stay in the fight for third in the overall standings.

Knibb hopes to build on 70.3 success

Taylor Knibb could also still make that move as the only athlete in contention to have raced just three times in the Series this season, finishing 5th, 6th and 3rd. The rising American star scooped the 70.3 world title by a huge 5-minute margin less than a week ago and her bike prowess is second to none. Even Flora? Well, far from being intimidated by the hill that bears her rival’s name, she is likely to see each of the eight climbs as a huge opportunity to siphon off her rivals.

Netherland’s Maya Kingma has registered back-to-back top tens as she continues her journey back to full fitness, while reigning U23 World Champion Emma Lombardi was in flying form at WTCS Cagliari as she ran her way into silver and onto a debut Series podium. France’s next generation looks in good hands already and there will be plenty waiting to see if she can follow up that result this weekend.

Brazil’s Luisa Baptista and Vittoria Lopes arrive off the back of a highly successful Americas Championships finishing first and second respectively and both will be looking to end the year on a high.

Top ten finishers here in 2019, Lisa Perterer (AUT), Natalie Van Coevorden (AUS) and Julia Hauser (AUT) will line up again looking to recapture that level of form, emerging talent Bianca Seregni (ITA) will be following up on her Series debut in Cagliari, and Yuko Takahashi starts as the top-ranked Japanese athlete in Bermuda. 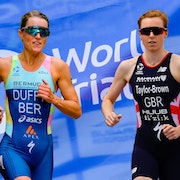 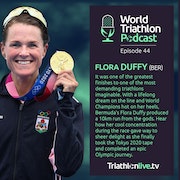