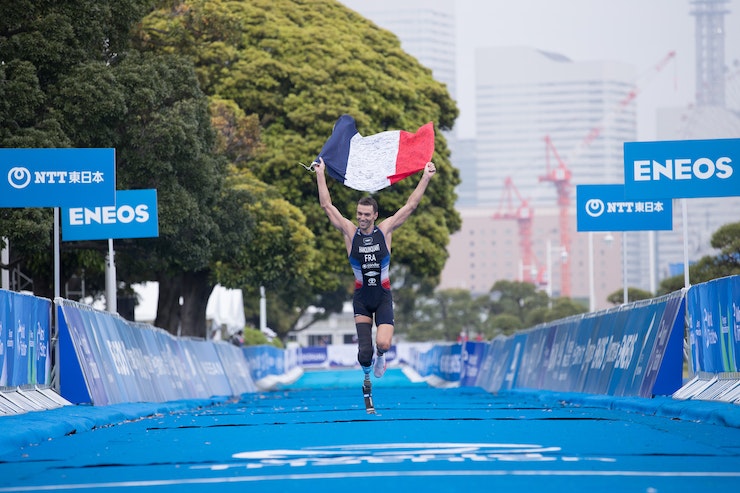 There were four gold medals for the USA on Saturday morning as the World Triathlon Para Series returned to the blue carpet in style in Japan. France and Netherlands both topped the podium twice, Spain, Australia and Great Britain a gold apiece on a superb morning of racing as the Paralympic Qualification period got underway.
—

In the women’s PTWC race there was little to call between Kendall Gretsch H2 (USA) and Mona Francis H2 (FRA) coming out of the 750m swim out front. Brazil’s Jessica Ferreira H1 did her best to close the gap on the handbike as Francis dropped back, but there would be no catching Gretsch once she was out of T2 and onto the final segment, 20 seconds the final winning margin over silver medallist Ferreira, Eva Moral (ESP) picking up the bronze.

For the men, it was a familiar one-two for the Netherlands as Jetze Plat H2 won the gold ahead of Geert Schipper H2. From the opening strokes of the swim Plat looked at ease in his second WTPS Yokohama race and the winner in 2018 couldn’t be caught by Schipper, himself victorious in 2019, while Ahmed Andaloussi H1 (FRA) held off the challenge of compatriot Alexandre Paviza H1 to secure his place on the podium, Japan’s Jumpei Kimura coming home in fifth.

A gripping battle raged in the men’s visually impaired race with nothing between USA’s Kyle Coon B1 and Spaniard Jose Luis Garcia Serrano B1 for the majority of the race. Indeed, it was only on the closing stages of the run that the American was able to pull away, taking the tape and a first ever series gold by just nine seconds from Garcia, Thibaut Rigaudeau B2 of France winning the bronze.

Australia’s Katie Kelly B3 had a more comfortable margin of victory in the women’s PTVI race, her first win at the top level since taking the 2017 world championship title in Rotterdam. She proved untouchable across all three disciplines to win the gold ahead of Vita Oleksiuk B2, and it was bronze for Japan, with Atsuko Maruo B2 coming home third.

It was victory in the men’s PTS2 category for Spain’s Lionel Morales thanks to a brilliant swim that put him into an early lead. Netherlands’ Maurits Morsink had significant ground to make up after exiting the water nearly seven minutes back, but that he did, a superb bike getting him back into podium contention before a 17.56 5km saw him take a fine silver, Adam Popp (USA) with bronze.

Melissa Stockwell (USA) was always in control of the women’s PTS2 from the moment she left T1 with 90 seconds over Yukako Hata (JPN). Two minutes faster over the bike and four over the run ensured gold for the American, Hata with silver and Veronika Gabitova (RUS) bronze.

Only the men lined up in the PTS3 category, and it was a second WTCS Yokohama gold for Nico Van Der Burgt (NED) with Victor Chebotarev (RUS) earning the silver ahead of teammate Alexey Petukhov, the youngster making a spirited series debut.

Alexis Hanquinquant was in superb form once again in the men’s PTS4 race after a brilliant battle with another of the new generation of para triathlete talents, Britain’s Michael Taylor. It was only as the French world champion emerged out of T2 that he was able to carve some daylight between himself and Taylor, a 16.25 over 5km proving decisive as he collected another gold. It was silver for Taylor, an excellent run seeing Hideki Uda of Japan edging a tight finish for the bronze.

Another American gold in the women’s PTS4 as Kelly Elmlinger powered to victory just as she did back in 2019 and four minutes quicker than two years ago. Japan’s recently crowned Triathlon Asia Champion Mami Tani took silver, Elke Van Engelen (GER) the bronze.

George Peasgood (GBR) just could not be caught in the men’s PTS5 after a brilliant swim along with Portugal’s Filipe Marques. Peasgood then pulled away over the bike, before Rio 2016 Paralympic Champion Martin Schulz (GER) closed in over the 5km. Schulz ran out of road, though, leaving a delighted Peasgood to take the tape, Brazil’s Ronan Cordeiro with bronze from Marques.

France’s Gwladys Lemoussu followed her Funchal World Cup win at the end of 2019 with another good display in Yokohama, proving too strong for Alisa Kolpakchy. The Ukrainian was delighted with a hard-won silver, Anna Bychkova (RUS) edging the bronze from Petra Levay. 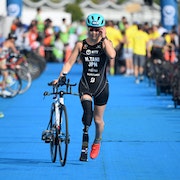 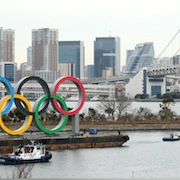 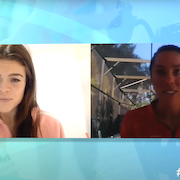