Mexico’s Crisanto Grajales timed his final lap surge to perfection as he ran away with his first career ITU World Cup title in Guatape today, while leading a gold-silver sweep for Mexico.  His teammate Sergio Sarmiento out-sprinted U.S. Olympian Manuel Huerta down the finish chute for silver.  It was the first World Cup podium for both Huerta and Sarmiento.

The men’s race saw a very different strategy than the women’s, with the men working together over the three disciplines to conquer the challenging course.

Irving Perez (MEX) was the first leader of the day, smoking the chase pack by 26 seconds with a strategy to swim outside the group for a more direct line to the buoys.  Perez headed for the hills first, followed by 11 men, including Olympians Leonardo Chacon (CRC), Huerta, and Grajales.

Perez rode solo for the first half of the bike until the chase group reeled in the Mexican shortly after the hairpin 180-degree turn. Colombia’s Hernan Rubiano seized the opportunity to charge ten seconds ahead of the then nine-person pack.

Rubiano didn’t ride at the helm long, as the group of ten joined to attack the final lap together.  Gerado Vergara (GUA) took his turn at the front on the final descent towards transition, but his lead didn’t last long as the men headed out on the 10km run.

Huerta and Grajales took off immediately in the four-lap run, surging to the lead. Chacon and Sarmiento were just a step behind them, creating a lead group of four and leaving Arturo Garza (MEX) and Perez behind.

Midway through the run, the trio of Huerta, Grajales and Sarmiento dropped Chacon, zipping a minute ahead of the Costa Rican. Huerta and Grajales ran shoulder to shoulder, with Sarmiento sitting on their hips until Grajales unleashed a brilliant burst of speed on the uphill portion of the final lap to move into the top spot.

Grajales secured enough of an advantage to trot over the finish line, avenging his missed gold last year in a time of 2 hours, 2 minutes and 14 seconds.

“I am very happy. Thank you to everyone who came out to cheer us, and who put on the race,” Grajales said. “Last year I was second, so it’s great to win this year. It was an incredible race. On the third lap, I realized I had some more left, so I attacked the final lap. And I’m very happy with it.”

Behind him, Huerta and Sarmiento battled for silver, but the day went to the Mexicans, as Sarmiento edged Huerta for silver, finishing nine seconds behind Grajales. Huerta garnered his first world cup medal in just few steps behind Sarmiento.  But the sprint to the line was not without controversy as the two men appeared to bump into each other just before reaching the finish line.  But officials ruled there was no penalty and the results stood.  Huerta didn’t address the situation in his post-race interview.

“I am very happy with my first podium in a World Cup,” Huerta said. “It’s one of the toughest races on the circuit. I’m very excited for the race again next year. I’ll definitely be here.”

Huerta’s training partner Chacon finished up in fourth place, followed by Garza and Perez in fifth and sixth place respectively, making it four Mexicans in the top six.  Ruben Dario Chavez was the first Colombian across the line in seventh place. 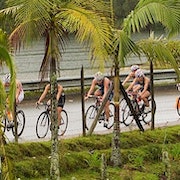