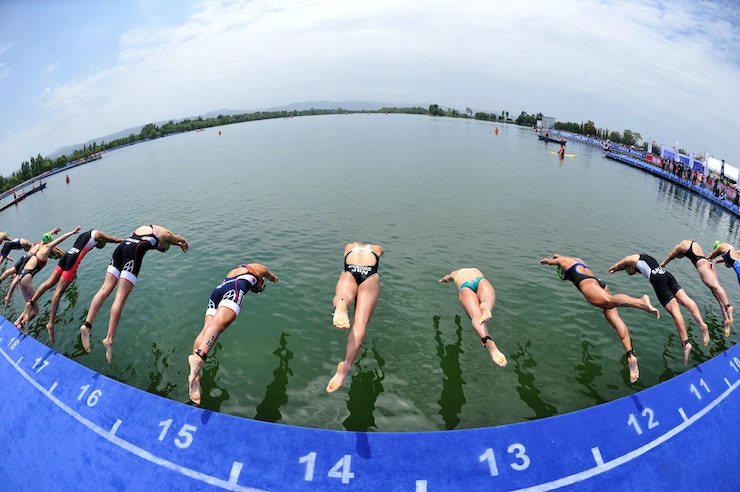 Chengdu, China, is the next stop on the ITU World Cup circuit and will host the first multi-race format of the year this weekend. This is the only event of the World Cup series that hosts a sprint distance on the opening day of competition and a super-sprint on the subsequent day, in a unique racing set-up.

In a semi-final elimination round, athletes will complete a sprint-distance course, which is made up of a 750-metre swim, 20-kilometre bike and 5-kilometre run. The men’s field will have a total of three semi-final rounds where the top nine men from each round will qualify for the finals, followed by the next top three fastest combined times to create a total of 30 men for the “A” Final start list.

For the women, two heats will occur with the top 14 finishers from both rounds combined with the next two fastest times will create the 30-woman “A” Final roster. In both genders the athletes with the time of 31st to 60th position in the semi-finals will qualify for the “B” Finals.

The finals will then cover a super sprint-distance format, which will see the athletes compete in a 400-metre swim, 10-kilometre bike and 2.5-kilometre run to crown the overall champions.

Both fields are stacked with Olympians, world class experience and it’s sure to be a thrilling weekend of racing action.

Women’s Preview
To commence the sprint distance elimination rounds in the first heat of the stacked women’s event is Australia’s Emma Jeffcoat who will be looking to attack from the start. With a strong start to her season and first World Cup career victory in Mooloolaba in March, Jeffcoat will be vying for a podium finish as one of the leading all round athletes in Chengdu.

Other strong prospects in the first heat who will put the pressure on to be up front are Yurie Kato (JPN), Elena Danilova (RUS) and Tamsyn Moana-Veale (AUS).

Tamara Gorman, from USA, will be looking for a dynamic swim, bike and run combination in the second heat after knowing what it takes to tackle the 2-day multi-race format. Gorman has previously contested in Tiszaujvaros, Hungary, covering a similar framework with both days comprising a sprint distance.

Yuliya Yelistrativa (UKR), known for her prominent run leg, will be aiming to stick with Gorman to make the cut. Yelistrativa is one of the fastest runners in the women’s field however a strong swim will prove critical.

Olympian Miriam Casillas García (ESP) will be making her season debut this weekend after some time off. Garcia excels in the sprint-distance format, so it will be exciting to watch her start her year off this weekend.

Both heats are stacked with experience and sprint specialists toeing the start line.

The men’s field will consist of three rounds of competitions all containing top men hungry to make the finals. The first heat will be led by Olympian Rostislav Pevtsov (AZE) and Australia’s Marcel Walkington. Pevstov has claimed the silver medal in Chengdu in 2016 and 2017 consecutively and will be vying for his golden moment this year.

Bence Bicsak (HUN) will prove a threat to the field after winning his first World Cup in 2017 in Hungary in a similar multi-race format as Chengdu. This style of sprint racing suits the Hungarian triathlete and will want to bolster a powerful display.

In the second heat Rodrigo Gonzalez (MEX), who claimed fifth place in Bermuda last weekend, will go head to head with Richard Varga (SVK) and Australia’s Brandon Copeland. All top men are powerful in different disciplines. Gonzalez was race champion here in Chengdu in 2016 when it was an Olympic distance competition and Varga is a missile in the water and will be one to watch.

Close behind is Frenchman Felix Duchampt who will be sighting a spot in the final and wanting to make an impact on the field.

The final and third heat in the men’s semi-finals will be led by Olympian Gábor Faldum and one to watch Igor Polyanskiy. Faldum is a strong all-round athlete and will be fighting to get in the second race.  Polyanskiy had a strong race in the 2016 Weihai ITU Triathlon World Cup and will be looking to create havoc and attack the race early.

On Saturday, May 5, the men will get underway in the 2018 Chengdu ITU Triathlon World Cup with the first semi-final round taking place at 09:00am (local time) while the women will follow at 11:30 local time. The “A” finals round will take place on Sunday, May 6, with the men starting at 10:05am (local time) with the women following directly after at 10:50am (local time).
Tune into the action with live timing at triathlon.org/live and on twitter @triathlonlive using hashtag #ChengduWC.