Triathlon is always a sum of its parts, swim, bike and run, but sometimes the exciting and individual performances get slightly buried in the finish tape. While overall, Jonathan Brownlee and Lisa Norden were the 2012 ITU World Champions, here is a look back at some of the most inspiring individual swim legs. Make sure to check back this week, as we review the most impressive bike and run performances of the year. Australia’s Erin Densham at the Mooloolaba World Cup
It’s fair to say that Densham had an incredible year, winning an Olympic bronze medal and two ITU World Triathlon Series races. She also went from March to Augustwithout missing a podium. But it was her swim at the first World Cup of the year that started it all. With the surf making it hard to see exactly who was in front, commentators on course had assumed it was fellow Australian Emma Moffatt. But Densham surprised even herself, saying afterwards “I’ve never been out of the water in front so that was a win for me right at the start, I think I laughed at the start because I was just so shocked.”

Slovakia’s Richard Varga and Great Britain’s Jonathan Brownlee in Auckland World Triathlon Grand Final
Varga had to feature in this list, as he’s clearly one of the best swimmer on the ITU men’s circuit – but Auckland was something breathtaking. Over 1500 metres, Varga and Brownlee put almost a minute on the rest of the field. While they were eventually caught on the bike, just the distance the pair managed to put on the field in the swim was mind-boggling. Varga’s official time for the 1500m leg was 16 minutes and 58 seconds. His London swim was also remarkable, notching another sub 17-minute time in the Olympic race.

Jonathan Brownlee in the 2012 ITU Mixed Relay World Championships
It might have only been a 300m distance to swim in Stockholm’s harbour, but what a difference it made. A brilliant leg from Non Stanford had helped to cut the deficit to Germany’s leader Steffen Justus to 28 seconds from the handover. But Brownlee halved that gap over the swim to enter T1 less than 15 seconds behind. While Germany’s chance to medal was cruelly lost when Justus’ bike slipped out from under him just a few hundred metres into the bike, Brownlee was already within striking distance because of that swim. Jonny said,  “I knew coming out of the water I got it down to about 12 seconds and I knew I was a chance then.”

Javier Gomez at the Hamburg World Triathlon Series event
Not many people beat Varga out of the water in the 2012 ITU season but Gomez did just that in Hamburg, which helped him on the way to a silver medal, completing a perfect tune-up ahead of London where he went on to win Spain’s first triathlon medal.

Stay tuned tomorrow when we’ll take a look at the most impressive bikes we saw this year. 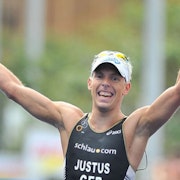 This week, we continue our review of the 2012 ITU season with a look back at the various thrilling sprint races that appeared…