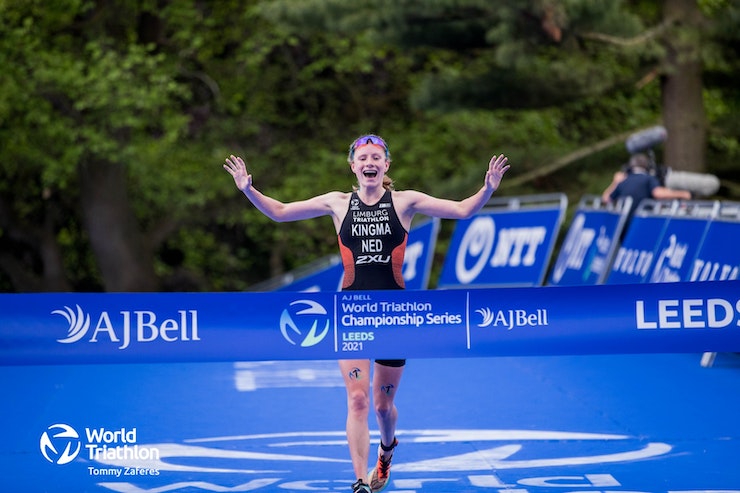 The Netherlands’ Maya Kingma became the queen of the north of England on Sunday afternoon, delivering a near-perfect race to take her first ever Series win at the World Triathlon Championship Series Leeds. Just as she had in the Yokohama season-opener, Kingma was able to break away on the bike, this time with Great Britain’s Jess Learmonth and Sophie Coldwell for company, and the three just grew and grew their lead. Coldwell hung on for a memorable first medal at the top level, but the day belonged to Kingma, who now finds herself top of the world rankings two races in.

“I can’t believe it! I had a very good swim, even though I was on the other side of the pontoon. I tried not to think about what could happen, but it was just all according to my plan, just like Yokohama,” said a thrilled Maya Kingma. “We just pushed and pushed. I was so happy to be with Jess and Sophie on the bike. I felt pretty strong and at some point I thought the group behind us could chase us but then we won back time. I am just so surprised. On the run I told myself that I had to try to leave Jess behind in the last kilometre on the downhill… I tried and it worked.”

—
The new-look WTCS Leeds course had a few surprises in store once the familiar 1.5km swim in Waterloo Lake had been negotiated, a long climb out of transition and 40km bike course entirely in Roundhay Park, before a 10km run that ended with a fierce incline and a tough finale.

With the swimming skills of British long-distance specialist Lucy-Charles Barclay - on the World Triathlon start list for the first time - and Jess Learmonth setting the pace, the swim strung out quickly, Kingma and Vittoria Lopes (BRA) both well in check with those out front.

Sophie Coldwell and Taylor Spivey (USA) completed a front six that managed to carve out a 30-second advantage by the closing stages, while Beth Potter (GBR) and Natalie van Coevorden (AUS) emerged from the second lap with Flora Duffy (BER) for company and ready to test herself on the return to racing.

While Learmonth, Coldwell and Kingma were on their bikes and up the first climb efficiently, Spivey, Charles-Barclay and Lopes dropped slightly back and could only form a trio just off the front three.

Potter was chasing to keep up with Duffy, while a third group further back included Katie Zaferes already over a minute back with Valerie Barthelemy (BEL), Amelie Kretz (CAN) and Carolyn Hayes (IRL).

Duffy road solo to bridge up to the three chasers and managed to get them organised by lap three, but by that point the damage was done and the gap to the second pack was already close to a minute, 90 seconds to to Potter and Britain’s Non Stanford’s group, two minutes to the likes of Laura Lindemann (GER) and Zaferes.

With two laps to go and the front three working so well, the gap grew to two minutes, and while the groups behind merged, there was now over three minutes to make up on the leaders.

Heading down into transition for the last time, Kingma was again into the run shoes fast and out looking fresh. Behind the leaders, Duffy again chose to go it alone and start to hunt down the podium solo after Spivey and Charles-Barclay struggled in T2. Hayes was also rolling the dice, Potter and Cassandre Beaugrand (FRA) going through the gears and setting up a big finish.

As Coldwell dropped back it became a shootout for gold between Learmonth and Kingma, neither looking like slowing their pace. Duffy was flying but running out of course, her 10km split of 33’47 nearly 20 seconds faster than Potter who ran her way into the top 10 but couldn’t quite catch Spivey and Charles-Barclay.

It wasn’t until the final 500m that Kingma made her decisive move and by that point, Learmonth could not respond. Taking the final climb solo, the 26-year-old was able to soak up the moment, taking the tape with joy. Learmonth’s silver was a typically gutsy display, a delighted Coldwell finishing ten seconds behind her teammate to celebrate a first WTCS medal.

“Leeds is always good,” said Jess Learmonth. “They have changed the course this year but it is still solid. I’m just happy to be back and enjoying the crowds. A podium here in my hometown… I absolutely loved it.”

“I’m speechless… Other years here I felt like I had missed an opportunity, so do it today with my friends and family here was fantastic,” said Sophie Coldwell. “I just took each leg as it came. I know I’ve been delivering components separately but I struggled to put them together in the past. I’m just over the moon right now, I can’t believe it.”

You can see the full results here 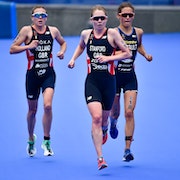