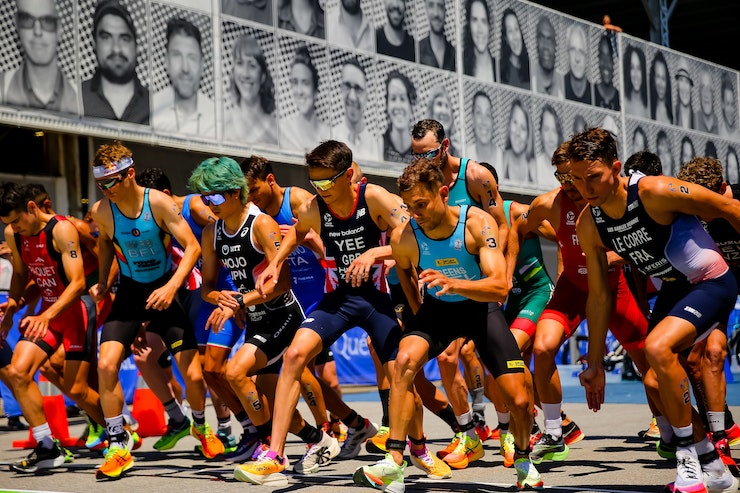 It was a duathlon format for the men’s qualification races following heavy rains in the lead up to the event affecting the water course, but that didn’t dampen the excitement as the battles to progress without the need for a repechage began.

Morocco’s Jawad Abdelmoula looked in complete control as the opening single-lap run section got the first of the two men’s qualification races underway, but there was little splintering of the field.

Sylvain Fridelance (SUI) was looking to make sure he didn’t have to chase on the final run, straight onto the gas out of transition and quickly opening up a healthy advantage.

Sam Dickinson (GBR) was the only one in the chase pack who wanted to try and close that gap and there was 7 seconds to the Swiss at the bell and then another 6 to the chasers including Marten Van Riel (BEL), Jelle Geens (BEL) Alex Yee (GBR) and last year’s champion here Dorian Coninx (FRA).

Fridelance had 7 seconds at the dismount line, but only 12 seconds separated 26 athletes all hunting the ten automatic spots in the final.

Bergere and Geens were first to give chase and had quickly caught Fridelance, Copeland and Abdelmoula tucked in and going well further back, Yee just about safe with Jacob Birtwhistle at the bell and Matthew McElroy on their shoulders.

Abdelmoula would stride to the line in first from Geens and Yee, McElroy also safe, and it was Charles Paquet for Canada with the precious final spot to avoid the repechage.

“A race at home and being able to make it directly to the final is very special,” said Charles Paquet. “In the second lap of the run I didn’t know if I was ninth, tenth or eleventh, until I heard a coach shouting at me that i was 10th but a guy was right on my back so I knew the last kilometre would be a hard one, and indeed it was. But I am so glad I made it.”

—
The second race saw Wilde and Luis line up side-by-side, Richard Murray continuing his road back to the blue carpet after an impressive return at WTCS Leeds and working his way into the safety of the main group.

Manoel Messias (BRA) and Callum McClusky (AUS) were in front out of transition, Genis Grau (ESP) also keeping his nose ahead, but there was drama ahead as Gabor Faldum (HUN) was upended and Roberto Sanchez Mantecon (ESP).

On the run, Alessio Crociani and McClusky lead down final straight, after turn and mount it was Messias, Wilde and Grau, Luis just off the pace but quickly bridging up.

At the end of the first lap, McClusky almost stumbled to the floor at the turn, then there was further incident as Luis foot appeared to get caught on a couple of occasions, the Frenchman remonstrating with those behind, all too aware of Jelle Geens’ injury sustained here last year when he was tripped on the tight course.

It was Messias home first, teammate Miguel Hidalgo safe in sixth, along with Diego Moya, Tyler Mislawchuk and Denmark’s Emil Holme taking the final two spots to force Roberto Sanchez Mantecon into 11th and the repechage with the likes of Genis Grau (ESP) and Seth Rider (USA).

“There are a lot of young guys coming up now, Im probably the oldest one in the field,” said Vincent Luis. “My friend Jelle Geens had a broken scafoid last year because of an incident like this. These people have to calm down a bit, and sometimes we have to report these incidents cause we don’t want this things happening in our sport.”

—
Belgium’s Marten Van Riel was one of the surprise names on the start list of the first of two men’s repechages, Tayler Reid (NZL) missing his strong swim and, knowing only five would go through from the race, there was no room for patience.

Kenji Nener (JPN) got straight on the front for the bike segment with Reid, Takumi Hojo and Van Riel, but all 18 athletes were in one pack for the first of the three laps.

Varga dropped off first due to a mechanical issue, Itamar Eshed (ISR) pulling up front at the bell but the whole field mentally preparing for an intense 2km run.

Hojo had a brilliant transition but Van Riel missed the box with his kit and fell back with work suddenly to do, teammate Noah Servais in fourth. New Zealand pair Reid and Trent Thorpe were men on a mission, Sylvain Fridelance (SUI) and Gianluca Pozzatti (ITA) trying to hold on.

But work Van Riel did, and while Fridelance was flying upfront and only four spots were now available, six athletes in contention. It was to be Hojo, Van Riel, Reid and Nener who scraped through, hoping not too great a toll was taken in the rising temperatures.

The second Repechage also had some unusual names on the start list, like Seth Rider (USA) or the Spanish pair Roberto Sanchez Mantecon and Genis Grau. Knowing that only the first five men will make it through to the final on Saturday, the first run segment was again a fast and furious one, with all athletes making it to the first transition as a big pack.

It was Norway’s Vettle Thorn who decided to push hard once they were on the bike, trying to open up some meters with the chasers behind, but he was not able to make an impact on the train of athletes, and they managed to get through the three laps controlling the speed on the 180 degree turns, avoiding any problems, with Mantecon, Gabor Faldum (HUN) and Seth Rider taking turns up front.

They all hit transition still as a compact group, to have Mantecon, Grau and Joao Silva (POR) to show their speed in the first little downhill out of transition. They never looked back, and only Ricardo Batista (POR) and Erwin Vanderplancke (BEL) were able to follow them, opening very soon a significant pack. Knowing that five was the safe number, and five men they were, they just worked together efficiently to make it safely to the finish line, only speeding up the group a little bit when thew saw Brent Demarest (USA), in 6th place, trying to catch up.

Batista, Grau, Vanderplancke, Silva and Mantecon got the precious final five spots for the finals on Saturday.