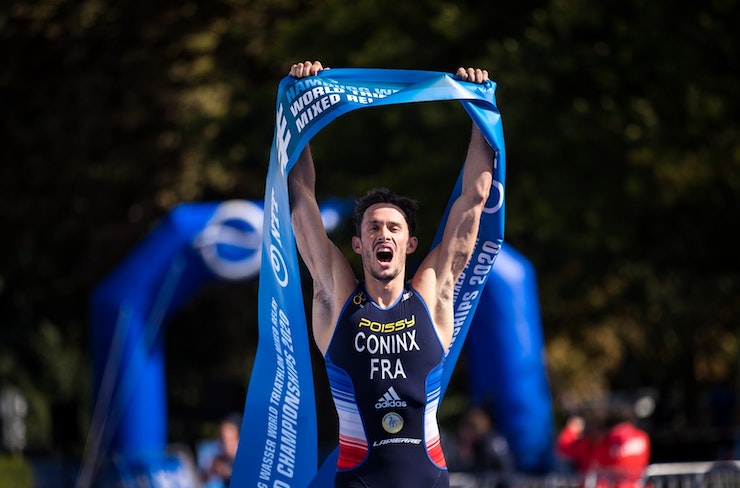 Sunday afternoon in Hamburg saw 19 teams take to the start line for the 2020 Mixed Relay World Championships, and though they may not have had the previous day’s World Champion Vincent Luis in his customary anchor leg, Dorian Coninx clearly enjoyed stepping up to bring home the gold after Leonie Periault, Leo Bergere and Cassandre Beaugrand had played their parts in another famous French win.

“Last year I had a crazy sprint finish with Alex Yee and I wanted to avoid that as best I could. We always give it our all, four athletes racing together even though it’s not always the same ones. I think it’s important we can all go out in any place and just before we start can decide who races where.”

The strength in depth of the squad on the biggest stage once gain suggested they will be the ones to watch in Tokyo for the Mixed Team Relay’s Olympic debut in August. “To win, we accept to lose”, said French coach Benjamin Maze, as he tested out a new-look line up. The enviable position of such a selection headache shows no sign of diminishing any time soon.

—
LEG ONE
As had been the case in the women’s race less than 24 hours earlier, Austria’s Therese Feuersinger was pushing the pace right from the gun in the first swim leg. Belgium’s Valerie Barthelemy, USA’s Taylor Spivey and Periault were back alongside her for the final strokes of their 300m swim, the field already pretty well stretched.

The Austrian had seven seconds over Spivey and Periault as the bike got underway, but they soon chased her down and a large pack began picking its way around the course.

There were 13 teams all together at the bell of the bike with 15 seconds over the chasers Spain, Russia, Germany and Portugal.   Lotte Miller took to the front for Norway’s big day and along with the newly crowned world champion Georgia Taylor-Brown was among the first out of T2 and hunting front-runner Barthelemy.

Spivey wasted no time before rolling the dice over the first few hundred metres and only Taylor-Brown was able to go with her in a small first breakaway.   The Brit then made her own move 1000m out and again left the rest of the field in her wake, Germany and Spain now 45 seconds back.

LEG TWO
Barclay Izzard took a decent advantage for Team GB into the water but he was soon caught by Leo Bergere and it was to be the Frenchman out of T1 first and onto the bike course.

USA’s Kevin McDowell was alongside him out of transition, while further back Jonas Schomburg was making up ground for Germany, a brilliant swim cutting their deficit to 25 seconds.

Belgium’s Jelle Geens then pushed to the front early on the bike, only for Kristian Blummenfelt to take the race by the scruff of the neck and put in some of his trademark pedal power.

The rest of the field had no answer to the acceleration and his lead was already up to 7 seconds at the halfway point of the bike.

The Norwegian extended that gap to take a 15 second lead out onto the run, Belgium, USA, Great Britain and France still together behind but unable to reel him in.

LEG THREE
Stine Dale took a healthy lead into the third leg, but   Beaugrand and Claire Michel were quickly onto her, Bergere and Geens having put France and Belgium right back in the hunt over the final few hundred metres.

Beaugrand was again swift through the water and had passed Dale with 150m to go, Jessica Learmonth and Katie Zaferes also going well as GB and USA came out second and third.

The trio then developed a slender gap over Michel that had soon stretched to 22 seconds at the halfway mark of the penultimate bike of the race.

Zaferes, Learmonth and Beaugrand arrived into T2 together, Dale, Sif Madsen and Michel still the chasers for Norway, Denmark and Belgium 40 seconds back. The leaders maintained their advantage over the run and after Beaugrand made a move with 250m to go, Zaferes responded to edge the leg.

LEG FOUR
It was USA, France and Great Britain in the hunt for the podium as Morgan Pearson, Coninx and Alex Yee took to the water, Belgium now 49 seconds back in fourth and Denmark a further six seconds back, Norway 70 seconds off the lead.

A determined swim saw Coninx out first for France, Pearson on his shoulder, a swift transition helping Yee stay in touch only for Coninx put the hammer down early on the bike as he looked to put enough gap into Yee to keep one of the fastest runners in the field at bay.

Coninx soon had 16 seconds on Pearson and 31 seconds on Yee, while Gustav Iden was looking to power Norway back into contention and pass the Belgians.

Over the 1.3km run, Pearson managed to halve the difference but couldn’t halt the French charge to a third straight world title as Dorian Coninx brought home the gold in the German home of triathlon.

“The Mixed Relay is such a team effort and we all want to work for each other. It’s awesome having so many strong athletes that we can mix it up. It’s short and it’s fast and doing it as a team just makes it even more special,” said Katie Zaferes for second-placed USA.

“It would have been too hard to break on the bike so I went for it on the run and just tried to keep that pace as long as I could. We redeemed ourselves after last year and it’s great to be back in the team environment and cheering each other on,” added Georgia Taylor-Brown, clearly happy with a good weekend’s work in Germany.

Iden crossed fourth for Norway followed by Belgium, Denmark, Switzerland and Germany, with Austria and Italy completing the top 10.

“I have plenty of things to work on, but we are so happy with our debut,” said Stine Dale after Norway’s sparkling relay debut - and an incredible Blummenfelt display - lit up the course.

The full results are available here 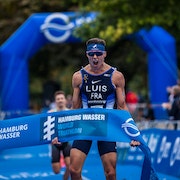 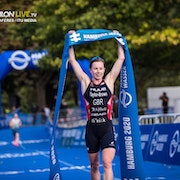 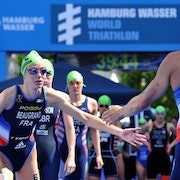 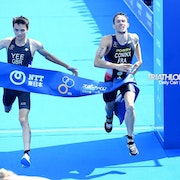 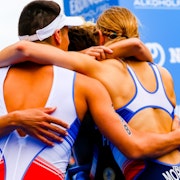