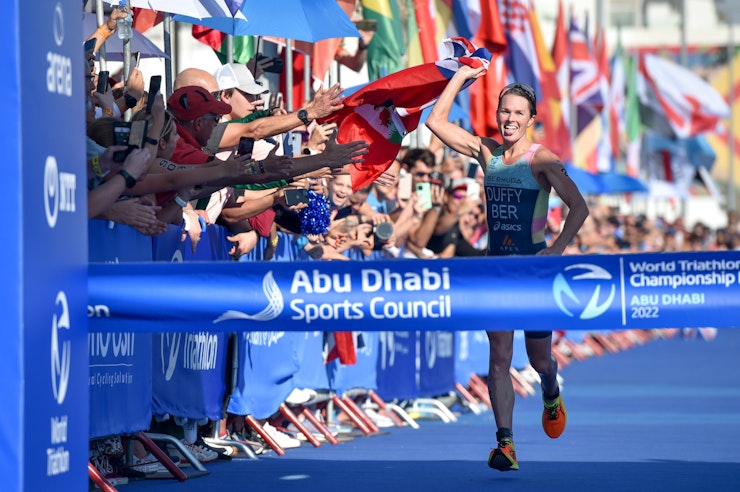 Flora Duffy became the only woman ever to win four World Triathlon titles on Friday afternoon in Abu Dhabi, with yet another display to utterly underline her position as the greatest woman that the sport has ever seen.

Shrugging off the soaring temperatures, Bermuda’s Olympic hero was again able to produce the goods when it mattered most, navigating plenty of drama on the 40km bike and then easing away from the only woman who could stop her date with destiny, Georgia Taylor-Brown. Gold secured Duffy the title, the race and Series silver went to Taylor-Brown, an excellent first podium for Lena Meissner in third. Another eventful fourth place finish for Taylor Knibb after coming off on the bike secured her the Series bronze.

“I’m really, really proud of this one,” said a beaming Duffy afterwards. “It was a difficult start to the year for me coming out of the Olympics and Covid and everything and it took a lot of work to get my mind back into it so I’m thrilled. I smiled a few times when it was just me and Georgia… I feel like she brings me to another level. We don’t really give each other an inch and I just wanted to stay safe because it’s super hot out there. When I got a little bit of a gap on the third lap of the run it was a little sooner than I anticipated but I thought; ‘well, gotta go now!’

With temperatures hitting 33 degrees and shade at a premium out on the course, the yellow hats of the top-ranked athletes filed in and on to the right of the pontoon on the edge of Yas Bay. Flora Duffy and Georgia Taylor-Brown didn’t get the best of starts in the water, but were soon digging in to hit the first buoy without any trouble Taylor Knibb on the front.

It was the American out first at the turn with Duffy on her feet from Beth Potter, Vittoria Lopes and Taylor-Brown out in fifth, and that was largely how it stayed for the second 750m lap, Summer Rappaport working her way to the front as the six came up and into transition.

German duo Laura Lindemann and Lisa Tertsch and Netherlands’ Maya Kingma were right there too, but Duffy was slick through transition and away on the 40km first, Taylor-Brown and Potter in hot pursuit, Knibb losing some ground on the six chasing the Bermudian.

It wouldn’t take long for Knibb to catch on, Germany’s Lena Meissner too, and behind the front nine, Taylor Spivey and Kirsten Kasper were riding together 23 seconds back, Cassandre Beaugrand fronting another 11 athletes giving chase but now 54 seconds off the leaders after three laps of nine.

Up front, Knibb was prodding and probing, looking to work an opening from wide positions so the Series leaders and championship chasers had to keep fully alert for any sign of an American charge as well as for the tight and technical corners.

Duffy then started to test those around her, a mini-break not sticking, the leaders stretching out then coming together repeatedly, though Lindemann fell off the pace to join those behind, now including Tertsch after the German came off but 90 seconds back after five laps.

Duffy, Knibb and Taylor-Brown continued to share duties out front, Potter having issues on lap six and next to fall off the leaders and start to ride alone, 20 seconds back.

More drama at the end of lap seven saw Knibb’s wheel slide out taking Kingma with her, Lopes and Meissner just able to avoid trouble and stay with Duffy and Taylor-Brown up ahead. Knibb wrestled with her chain for what felt like an eternity but still managed to ride back up to Kingma at the bell, but there was now suddenly just four main contenders for the medals.

With the bikes racked, there was no surprise to see the two title-chasers heading out together once more and the best in the world ran together for two laps, the title and an epic season coming right down to a 5km foot race to the line.

It was coming out onto lap three that Duffy asked the big question, and as she accelerated up the small hill and back out into the heart of the course, it quickly became clear that Taylor-Brown had no answer. Soon the Bermudian was out of sight, looking undaunted by the heat, fully focussed on the fourth title she slowly realised was hers.

Taylor-Brown finished with the silver at the end of an exhausting campaign, Meissner with a gutsy first ever WTCS podium ahead of Knibb. Leonie Periault (FRA) ran her way into fifth, Lopes hung on for an excellent sixth ahead of Spivey, Emma Lombardi (FRA), Miriam Casillas Garcia (ESP) and Cassandre Beaugrand rounding out the top 10.

—
“I gave it everything I had today,” said Georgia Taylor-Brown. “It’s been a hard few months and I’ve tried to forget about it all but i’m really proud of myself out there today and giving it everything and doing all I could. We were battling it out to the end and I wouldn’t have it any other way, and I don’t think she would. I’m still learning in every race and I still want that world title one day.”

“I can’t believe that, I need a few days to let it sink in,” said a thrilled Meissner. “It was tough but I got here 10 days ago and had good heat prep and there was lots of water and ice out there. I just tried to stay calm and confident and it just worked perfectly for me today.”

“I’m pretty shocked, there were a lot of ups and downs in the season and today,” said Knibb. “The corner was entirely my fault, I wasn’t full processing things at that point, it was a bit of user error and I’m sorry to Maya and Vittoria and Lena behind me for that. Hopefully I will be back here in March to go again.” 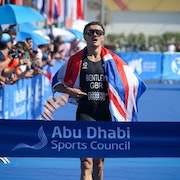